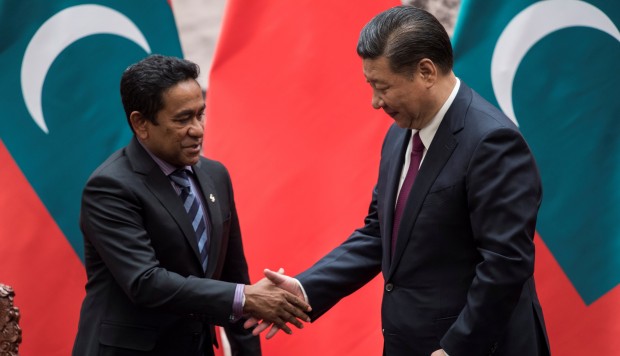 China and the Maldives on Thursday signed deals to cooperate on a free-trade agreement and on Beijing’s maritime trade plan, as China takes a growing strategic interest in South Asia.

The agreements were signed after a meeting between Chinese President Xi Jinping and Maldivian President Abdulla Yameen Abdul Gayoom, who is on a four-day visit to China that will end on Saturday.

China and the Maldives should strengthen cooperation on finance, maritime issues, climate change, anti-terrorism and anti-drugs efforts as well as tourism, culture and education, he said.

The Chinese leader also urged his Maldivian counterpart to support China within the South Asian Association for Regional Cooperation, of which the Maldives is a member.

Located southwest of India in the Indian Ocean, the tiny archipelago nation has gained strategic importance since Xi’s visit in 2014, the first by a Chinese president, during which Beijing secured the Maldives’ agreement to become part of China’s maritime Silk Road – causing alarm for regional power India. The maritime trade and infrastructure project aims to connect China’s coast with Europe through the South China Sea and the Indian Ocean. Yameen’s visit comes a week after the Maldivian parliament approved the draft free-trade agreement with China that will see the countries waive tariffs on more than 95 per cent of goods imported from both sides, along with a commitment to open service markets in finance, health care and tourism.

But the deal came in for heavy criticism from the Maldives’ opposition parties, who said it was signed in haste without sufficient parliamentary scrutiny and that it would take the country further “into a Chinese debt trap” and bring about “increasing instability in the Indian Ocean region”.

The Maldivian government has insisted the agreement is based on commercial – rather than political – considerations.

On Thursday, Yameen told Xi that Beijing’s “Belt and Road Initiative” was providing support for smaller countries, such as the Maldives, to develop, and that the Maldives backed China playing a bigger role in world affairs, CCTV reported.

Sun Shihai, a researcher on South Asian studies at the Chinese Academy of Social Sciences, said China would have to be cautious about investing in strategic sectors of South Asian countries like the Maldives and Sri Lanka which are in India’s backyard.

“Because there is a lack of mutual trust with these South Asian countries, if China doesn’t carefully handle its investments there, it might create problems,” he said.

But Wang Dehua, director of the Centre for South Asia Studies at the Shanghai Academy of Social Sciences, said the US alliance with India as part of its Indo-Pacific strategy had caused unease in Beijing, creating a stronger need for China to boost ties with other Indian Ocean countries.

Rajeev Ranjan Chaturvedy, a research associate at the Institute of South Asian Studies, National University of Singapore, said India was not concerned about economic cooperation between China and the Maldives but about China’s emerging political and security nexus in the region.