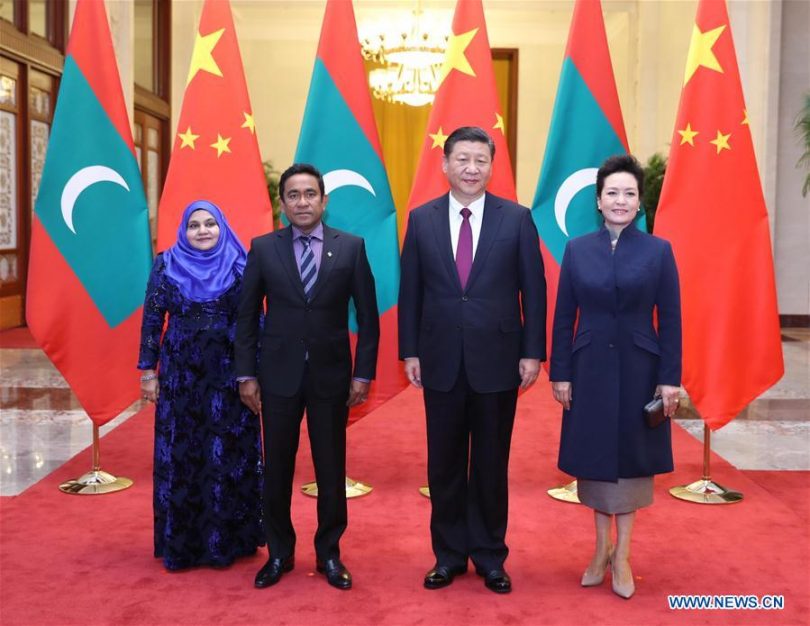 The consensus was reached during talks between Chinese President Xi Jinping and President Abdulla Yameen Abdul Gayoom of the Maldives, held at the Great Hall of the People in central Beijing.

The two presidents witnessed the signing of 12 agreements, including a memorandum of understanding on the Belt and Road construction, a free trade agreement and agreements on the economy, human resources, oceans, environment, health care and finance.

Xi told Yameen that the Belt and Road Initiative squares with the development strategies of the Maldives.

He said China regards the Maldives as an important partner in the construction of the 21st Century Maritime Silk Road.

“China is willing to dovetail the development strategies with the Maldives and share opportunities to realize common prosperity,” Xi said.

Proposed by Xi in 2013, the Belt and Road Initiative aims to build trade and infrastructure networks connecting Asia with Europe and Africa on and beyond the ancient Silk Road routes. It comprises the Silk Road Economic Belt and the 21st Century Maritime Silk Road.

This year marks the 45th anniversary of diplomatic ties between the two countries. Yameen is the first president of an Asian country to visit China since the 19th National Congress of the Communist Party of China (CPC) held in October.

Xi said the bilateral relationship has entered a fast-track in recent years as the two countries established a comprehensive forward-looking partnership.

He said the two countries should jointly crack down on crime, terrorism and drug trafficking, while expanding exchanges and cooperation in tourism, culture, education, health care and at local levels.

“China stands ready to work with the Maldives to jointly deal with climate change to realize green, low-carbon and sustainable development,” Xi said.

He said he hoped the Maldives would continue to support China’s cooperation with the South Asian Association for Regional Cooperation.

Yameen congratulated Xi on the success of the 19th CPC National Congress and his re-election as general secretary of the CPC Central Committee.

He said he believed that the Chinese people will achieve their two centennial goals.

Yameen said the Maldives viewed China as “amongst our closest friends, most trusted and most dependable partners.”

He said Xi’s visit to the Maldives in 2014 brought bilateral ties to a new level and that he appreciated China for its strong support.

“The Belt and Road Initiative has greatly helped the development of many small and medium countries,” he said.

Yameen said the Maldives adhered to the one-China policy.

“On the occasion of the 45th anniversary of forging diplomatic ties, the Maldives is willing to deepen friendship and consolidate bilateral cooperation on infrastructure construction and in areas important to people’s livelihood,” Yameen said. “The Maldives looks forward to seeing China play a bigger role in international affairs and is ready to enhance coordination with China in this area.”

Prior to the talks, Xi held a red-carpet welcoming ceremony for Yameen, who is here for a state visit from Wednesday to Saturday.