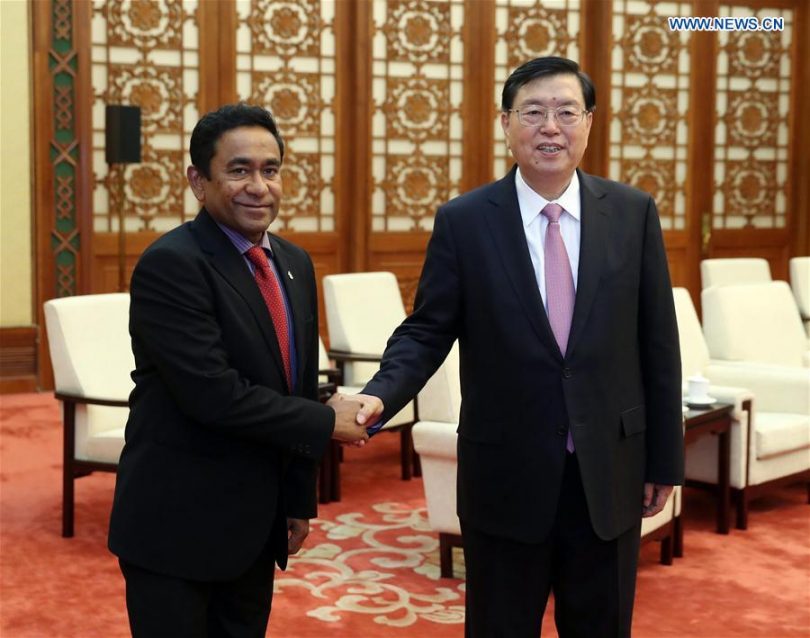 BEIJING, Dec. 8 (Xinhua) — China and the Maldives agreed in Beijing on Friday to boost parliamentary exchanges and share experience in governance and legislation.

The agreement was reached between China’s top legislator Zhang Dejiang and visiting President Abdulla Yameen Abdul Gayoom of the Maldives.

Zhang, chairman of the Standing Committee of China’s National People’s Congress, said China regards the Maldives as an important partner in the construction of the 21st Century Maritime Silk Road.

China is willing to work with the Maldives to promote their forward-looking comprehensive partnership to benefit the two peoples, Zhang said.

He called on the legislative bodies of China and the Maldives to cooperate more in their experience in state governance and step up people-to-people exchanges.

Yameen said the Maldives values its friendly ties with China and called for more communication between the legislative bodies of the two countries.

On Friday afternoon, Yameen also laid a wreath at the Monument to the People’s Heroes in Beijing.