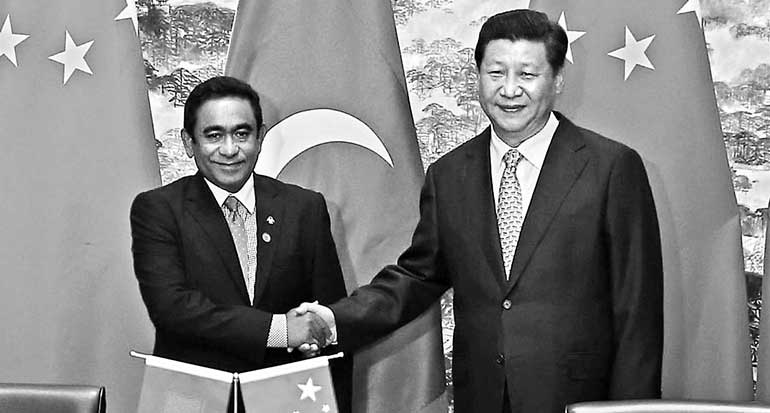 China and the Maldives appear to have different perspectives on Maldivian President Abdulla Yameen’s three-day visit to Beijing which will end today, 9 December.

Both countries feel that the visit has taken the relationship to a higher level and broadened its scope greatly. But while China has laid stress on the signing of an agreement to cooperate on its One Belt One Road (OBOR) international connectivity initiative, Maldives has put emphasis on its ambitious development plans and China’s role in them. It sees the signing of an FTA as being a vital component of its “transformational” development plans.

Given the controversy raised by the opposition Maldivian Democratic Party (MDP) about the Free Trade Agreement (FTA), Maldivian ministers and officials concentrate on spelling out the benefits of the FTA to the country. The OBOR as such is mentioned in passing as a component of the country’s “futuristic” development schemes.

Twelve agreements were signed in the presence of President Yameen and his Chinese counterpart Xi Jinping on Thursday and these included an FTA and an agreement to cooperate in building projects under the OBOR Initiative.

Reporting on the agreements, China’s official news agency Xinhua said: “China and the Maldives on Thursday agreed to jointly promote the Belt and Road Initiative to energise bilateral ties. Chinese President Xi Jinping told Yameen that the OBOR Initiative squares with the development strategies of the Maldives.”

Xinhua quotes Xi as saying that “China regards the Maldives as an important partner in the construction of the 21st Century Maritime Silk Road”. This is a very important declaration for China, the Maldives and the Indian Ocean Region.

Proposed by Xi in 2013, the Belt and Road Initiative aims to build trade and infrastructure networks connecting Asia with Europe and Africa on and beyond the ancient Silk Road routes. It comprises the Silk Road Economic Belt and the 21st Century Maritime Silk Road, Xinhua said.

The Chinese agency quoted Xi as saying that China and Maldives should share their experience in State Governance, and promote exchanges between government departments, political parties, legislative bodies and judicial organs.

He also said that the two countries should jointly crack down on crime, terrorism and drug trafficking, while expanding exchanges and cooperation in tourism, culture, education, healthcare, and at local levels.

It is therefore clear that China is keen on multifarious and close links with the Maldives from the top echelons to the grassroots level.

On his part, President Yameen said the Maldives viewed China as being “amongst the Maldives’ closest friends, most trusted and most dependable partners”. He said Xi’s visit to the Maldives in 2014 had brought bilateral ties to a new level and that he appreciated China for its strong support.

Making a mention of OBOR, the Maldivian President said that the “Belt and Road Initiative has greatly helped the development of many small and medium countries.”

Very significantly, Yameen added that the Maldives “looks forward to seeing China play a bigger role in international affairs and is ready to enhance coordination with China in this area”.

The Maldivian Government’s press release on the signing of the agreements listed the agreements without comment. However, Yameen’s speech at the Business Leaders’ Forum revealed the Maldives’ perspectives and interests.

Yameen spoke about his Government’s development strategies and China’s role in them without mentioning OBOR, though the OBOR has everything to do with connectivity which is one of Maldives’ critical requirements.

Yameen told the business leaders that this is the “prime time” to invest in the Maldives.

“The Maldives always welcomes Foreign Direct Investments with open doors. There is a mistaken belief that the Maldivian economy is small with limited business prospects. Many international investors in the Maldives, who know the market well, will vouch for the fact that the Maldives is a luxury destination famous for visits by high net-worth individuals,” the President said.

Highlighting the measures being taken by his administration to transform the Maldivian economy, Yameen underscored the special initiatives, including the development of Hulhumale Youth City and the development of Special Economic Zones.

The President noted that the Foreign Investment Act and the Special Economic Zones Act were in place to ensure that foreign investments were protected.

Noting that Maldives is going through a key “transformational moment in its history”, Yameen stated that to achieve the true aspirations and desires of the Maldivian people, particularly the youth population, it needed to find “creative and sustainable” ways to enhance its economic base, create more opportunities for gainful employment, and provide livelihood opportunities for its people across the country

Speaking at the official reception held to mark the 45th anniversary of the establishment of diplomatic relations between the two countries on Wednesday, Yameen said that China was the Maldives’ “closest development and commercial partner”.

The Maldivian President underscored the fact that China, like the Maldives, believes that solutions to a country’s problems have to be “home-grown” and not imported from outside. Economic and political solutions cannot be given to others on the basis of the Western theory that “one size fits all”.

By talking of home-grown solutions, Yameen implied that China does not interfere in the internal affairs of the Maldives in contrast to the West, which does. Both Yameen’s Maldives and Xi’s China abhor foreign interventions in whatever pretext.

Yameen recalled the fruitful discussions held and agreements signed during President Xi Jinping’s historic State visit to Maldives in 2014. “These agreements paved the way to a partnership of future-oriented, all-round friendly, and cooperative ties,” he said.

Maldivian ministers and officials have been at pains to explain the benefits of the FTA with China. The FTA gives access to the humongous Chinese market for Maldivian fish and fish products at zero duty. This is a boon at a time when Maldivian fish exporters are facing difficulty in paying 25% duty to enter the EU market, the Maldives’ traditional market, the Minister of Fisheries Mohamed Shainee points out. Fish and fish products account for 90% of Maldives’ exports.

The FTA enables China to export machinery to the Maldives which are necessary for the latter’s ongoing ambitious infrastructural development plans, Shainee added.

“If the Maldives is to increase its tourist arrival rate from the current 1.5 million per year to seven or eight million per annum, it has to have the infrastructure for it, and that needs equipment and expertise on a large scale,” he explained.

On the role of the Maldives in China’s OBOR, Shainee said that the China-funded airport renovation and other connectivity projects could be deemed to be part of the OBOR.