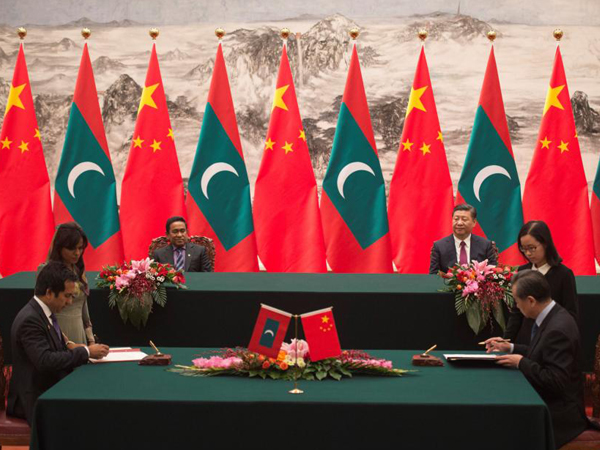 The lopsided nature of the FTA, loaded as it is heavily in favour of the Chinese, would adversely impact on virtually every segment of Maldivian economy.

The people of Maldives and its business community are alarmed on the implications of the FTA and view it as an aggressive act by China to pursue its own agenda. The opposition parties in Maldives and the business community attribute the deal also to President Yameen’s underhand dealings in award of contracts to Chinese companies and an effort by Yameen and the China to protect the latter’s investments in the Maldives.

There is no doubt that Yameen has rushed into signing the FTA, a document that has neither been thoroughly reviewed, nor feasibility studies done or discussions held with stakeholders.

According to sources within the Maldives government, there was pressure from China on signing of the FTA, the first by Maldives with any other country. It appears that the Chinese embassy in Male had made it clear to the Maldives that in future all financial assistance to the country would be linked to the signing of the FTA.

A cursory study of the FTA document will be enough to understand that the FTA is Beijing driven, with little in it for Male. The preamble of the document includes ‘strengthening cooperation on jointly building the 21st century Maritime Silk Road’, one of the key goals of the Chinese government under President Xi Jinping.

However, the inclusion of trade in services, especially mode 3 (commercial presence) and mode 4 (movement of natural persons) would enable China to open tour and travel related representative offices in the Maldives, operate cruise/line-abroad tourist accommodation vessels with 40 bed capacity or more. Opening of the tourism sector to the Chinese would result in loss to Maldivian tourism revenues apart from cutting employment opportunities for locals.

The FTA would further open the floodgates for Chinese imports adversely affecting Maldives’ fragile balance of payments situation. In its entirety, the FTA would make Maldives an offshore hub for China.

The opposition parties in the Maldives have united in their opposition on the FTA. In this regard, they handed over (Dec 6, 2017) a signed letter to the Chinese Ambassador in Male Zhang Lizhong, where they expressed deep concern over the signing of FTA The opposition leaders highlighted that the Maldivian government followed unconstitutional and illegal process in the Parliament to approve the FTA and as such Members of Parliament of the opposition could not recognize the FTA in its current form. The letter was signed by MDP Parliamentary Group (PG) leader Ibrahim Mohamed Solih, Abdulla Riyaz, Deputy PG leader of JP; Mohamed Musthafa, PG member of PPM (Gayoom faction) and Anara Naeem, PG leader of Adhaalat Party.