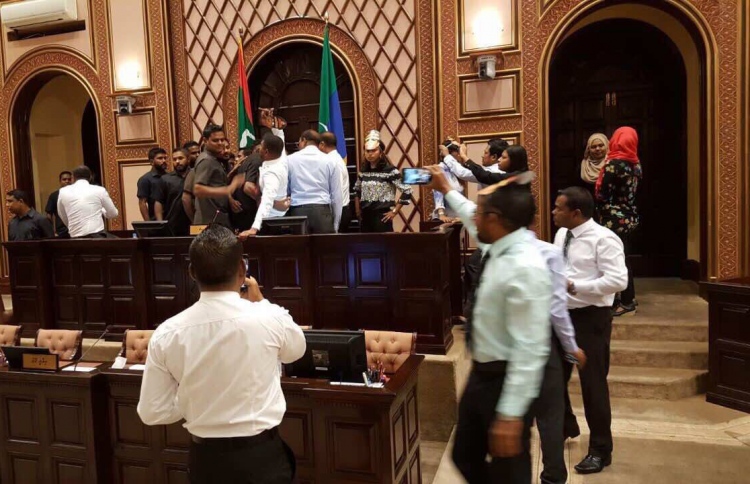 Canada has called on the government of the Maldives to respect democratic rights and ensure the independence of institutions.

In a series of tweets posted by the High Commission of Canada to Sri Lanka and the Maldives, Canada stated, “Recent developments continue a disturbing trend in #Maldives that runs counter to democratic principles & Maldives’ own Constitution.”

Noting that a free and fair parliament and an opposition that is not encumbered by political harassment and intimidation are essential for a healthy democracy, Canada urged the Maldivian government to respect democracy and the independence of institutions, and to protect the people’s rights.

Meanwhile, the United States has also recently voiced concerns over the escalating political situation in the Maldives and called on the government to establish an environment conducive to the functioning of a free and fair parliament.

Tensions between lawmakers of the ruling coalition and joint opposition are recently at a peak, with heated verbal fights breaking out between the opposing sides during the last few parliament sittings.

Ever since the parliament administration recently quashed the opposition’s third motion of no confidence against Speaker Abdulla Maseeh, the opposition MPs have been declaring that they would not allow any sittings chaired by Maseeh. The lawmakers had filed the impeachment motion with 45 signatures, including 10 from defecting lawmakers from ruling Progressive Party of Maldives (PPM). However, following a rushed Supreme Court ruling on anti-defection which resulted in four of the PPM lawmakers being unseated, the parliament administration had declared the no confidence motion invalid as the number of signatures had dropped below the required minimum of 42.

Opposition lawmakers have refused to recognize the decision and insisted that other agendas cannot be scheduled for parliament sessions before the lawmakers vote on the speaker’s censure motion.