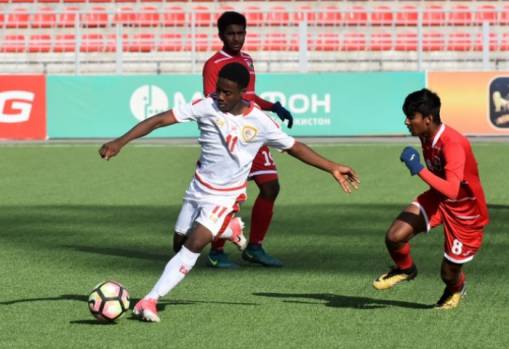 Dushanbe: Oman kicked off their AFC U-16 Championship 2018 Malaysia qualifying campaign with a bang beating Maldives 8-0 in Tajikistan on Wednesday.

Oman took charge of the match early as they went ahead in 8th minute when an unmarked Issa Khalfan Al-Naabi rose above the Maldives defenders to score off a corner.

Mulham Yousuf Al Sinaidi scored Oman’s second in 25th minute when he pounced on a loose ball off a freekick past the Maldives keeper.

Oman made it three after Fahad Said Al Rasbi found ample space in the penalty box as he beat three defenders to score in the 44th minute.

Oman managed to sqeeze in one more at the stroke of halftime through Omar Nasser Al Salti’s effort.

The forward making light work of the Maldives defence in their penalty box as he blasted Oman’s fourth to the back of the net.

There was no reprieve for Maldives after the break, as Oman put them under pressure from the start of the whistle with their high pressing game.

Al Sinaidi picked up his second in the 61st minute after Al-Naabi beat the offside trap to cross from the left into the path of an unmarked Al Sinaidi – who was the man-of-the-match.

Oman showed no signs of slowing down as they pushed for more goals. Nasser ‘Abdallah Al Naabi hitting a brace in the 64th and 72nd before Tariq Khamis Al-Mashary completed the rout in the 82nd minute.