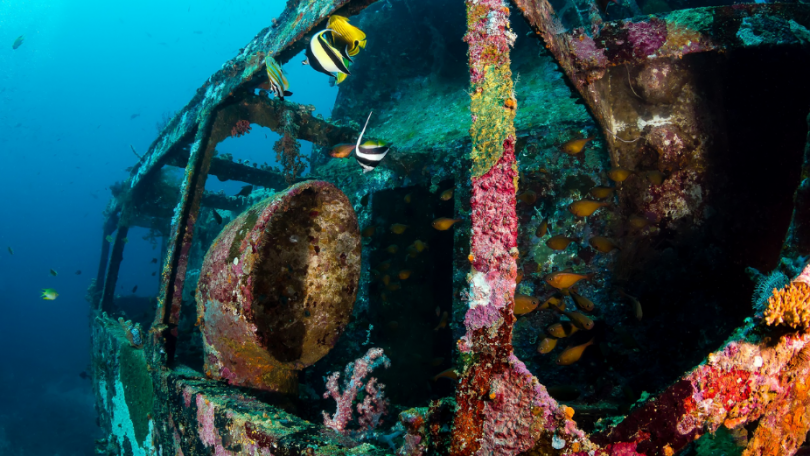 A special event to commemorate the 75th anniversary of the British Loyalty wreck was held yesterday morning at Maradhoo, Addu City harbour. Visit Maldives joined this event, organized by Nalafehi Meedhoo, a non-government organization based in Meedhoo, Addu City, in association with the Addu City Council.

The event commenced with the unveiling of the logo for the 75th anniversary of the British Loyalty wreck. This was followed by cultural dance and a speech by the Addu City Mayor, Mr Abdulla Sadiq. The Minister of Tourism, Honorable Dr Abdulla Mausoom also gave a speech which was followed by a cultural activity and the handing over of the British Loyalty model to the Addu City Mayor. After this, the divers and the VIP’s travelled to the shipwreck for the special diving event which was concluded with a special group photo, and the handing over of the certificate of participation to the divers by Mr Abdulla Sadiq and Honorable Dr Abdulla Mausoom.

The day marked the 75th anniversary of the sinking of the World War II oil tanker in Addu City. The British Loyalty Wreck, which is the biggest shipwreck in the Maldives, lies 33 meters underwater between the islands Maradhoo and Hithadhoo. Over the years, it has garnered a lot of attention and popularity as a diving destination among both locals and tourists and has come to be one of the best dive sites in the Maldives. The ship is enveloped with hard and soft corals that are home to many small fishes. It is also surrounded by groups of local fishes, including blue-fin jack and turtles that swim around the ship. Every so often, the divers also find manta rays and sharks around the ship.

Additionally, it is notable that this wreck has been declared a protected area by the Environmental Protection Agency (EPA) of Maldives in 2018. This was done to preserve the natural beauty and surroundings.