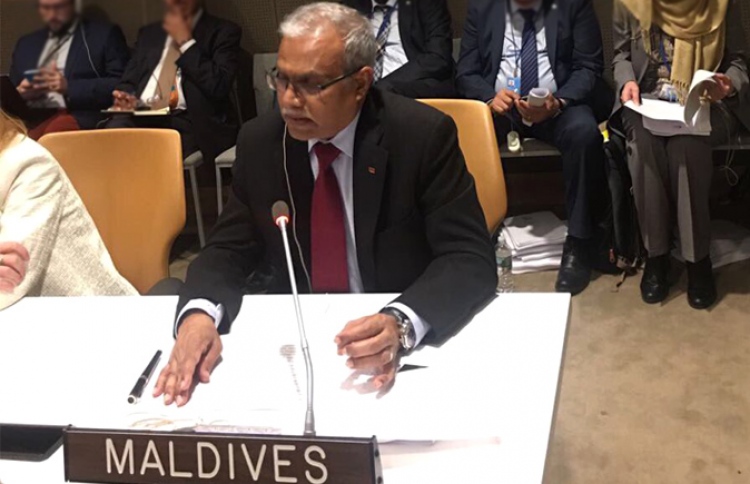 Minister of Foreign Affairs Dr Mohamed Asim on Wednesday called on international bodies to initiate immediate action to intervene in the persecution of the Rohingya in Myanmar.

Addressing an emergency sit-down of the Organisation of Islamic Cooperation (OIC), the foreign minister declared that the Maldives is deeply concerned over the Muslim minority, which is fleeing the ongoing crackdown by Myanmar’s security forces.

He also called on the Burmese government to conform to the rulings of the United Nations and international treaties on human rights.

Minister Asim is currently in New York, USA, with a Maldivian delegation to attend the 72nd UN General Assembly.

The Maldives last Friday had abstained from the vote to include the debate on “Responsibility to Protect and the Prevention of Genocide, War Crimes, Ethnic Cleansing, and Crimes Against Humanity” on the formal agenda of the UN assembly. While the motion was successfully pushed through with the votes of 117 nations, the Maldivian government had consequently come under fire for refusing to vote, with the public and opposition criticizing the state for failing to actively follow through with its verbal stance against the plight of the Rohingya.

However, the government has countered the disparagement, stating that the motion was not specifically about the Rohingya Muslims. The ministry added that it had long ago decided to abstain from the R2P vote as it would facilitate the stronger powers of the world to interfere with the domestic affairs of weaker countries.