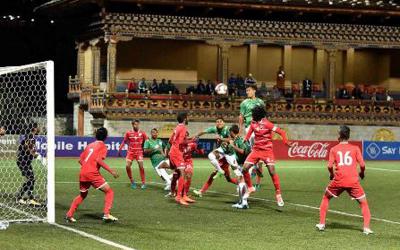 Bangladesh maintained the all-win record in the five-nation SAFF U-18 Championship beating the Maldives by 2-0 goals in their 2nd match at the Changlimithang Stadium in Thimphu, Bhutan on Wednesday.

Jafar Iqbal, who scored twice in their 4-3 victory over India in the opening match, also scored one goal against Bhutan in the 45th minute of the match after Saikat Mahmud opened the account in the very 9th minute.

Hosts Bhutan also collected full six points from two matches beating Nepal 1-0 in the day’s match after beating the Maldives by 1-0 goal in the opening match on Monday, but they went down in the race due to poor goal difference of scoring two goals against conceding any (2-0).

After trailing by 0-2 goals, the Maldives created strong pressure on Bangladesh but failed to utilise any of them due to strong defence lineup of Bangladesh, especially by Bangladesh custodian Mahfuz Hasan Pritom who saved at least three good attempts.

Earlier on Monday, staging a great comeback from three goals behind, Bangladesh earned a creditable 4-3 goals victory over their giant neighbour India astonishing the football pundits to get off to a flying start in the regional meet.

Bangladesh smartly returned to the match displaying a brilliant performance scoring four goals in a row in the 2nd half after trailing by 0-3 goals in the first half against India.

In the remaining matches, Bangladesh will play Nepal on Monday (25 Sept) and hosts Bhutan on Wednesday (27 Sept) at the same venue.

On completion of the league basis matches, the top team of the five-nation meet will be the champions.