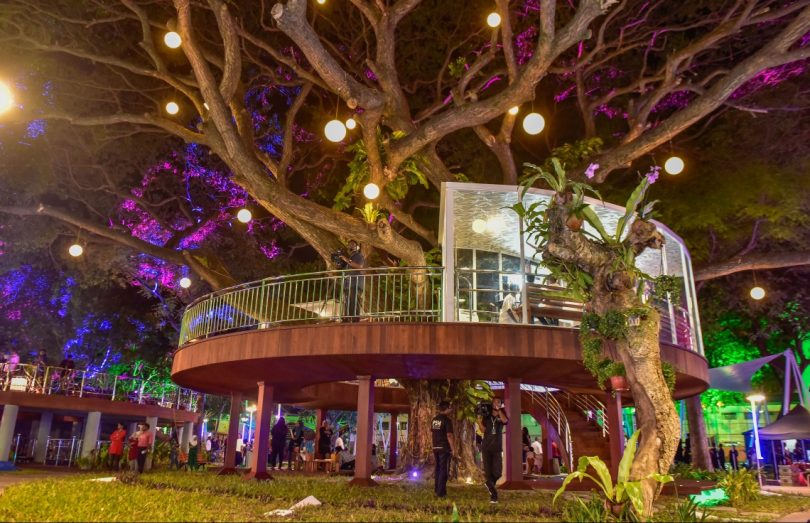 One of the new developments in the park – ‘Rasrani View’. MIHAARU PHOTO / NISHAN ALI

The housing ministry on Wednesday declared that it is working to make president Abdulla Yameen’s vision to “bring winter to the Maldives” this month with the special Winter Corner being developed in Rasrani Bageecha.

President Yameen had unveiled Rasrani Bageecha, formerly known as the historic “Sultan Park” in capital Male, last August. He had revealed then that the revamped park would feature a Winter Corner for children and that “winter will come to the Maldives in December.”

Regarding the project’s progress, the housing ministry cryptically stated that it is striving to complete the Winter Corner this month, but did not confirm a date.

The Winter Corner is being developed at the site of the old Kalhuvakaru mosque in the park grounds. The corner would feature “snow” and an ice skating rink for children, according to the ministry.

The site of the Winter Corner is currently closed off to the public.

The old Sultan Park was built on the southern side of the demolished grounds of a 16th century Royal Palace. The historic ground was turned into a park in 1968 when the Maldives ended the sultanate and became a republic.

Its rebranding into “Rasrani Bageecha” marked the first time the park’s name was changed. “Rasrani” is a colloquial term for “kings and queens” in local Dhivehi language. The new developments in the park include a tree-house called ‘Rasrani View’ which includes classrooms, an art-deck with a view of the whole park, and conference rooms, a green tunnel in the grounds where visitors can observe the old royal site’s greenery, and a fountain.