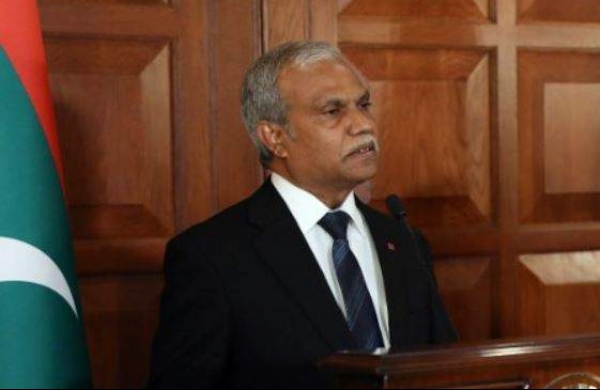 NEW DELHI: Amidst growing speculation of a chill in relations between New Delhi and the Maldives, its minister of foreign affairs, Dr Mohamed Asim, arrived in New Delhi Wednesday as a Special Envoy of President Abdulla Yameen Abdul Gayoom.

A Free Trade Agreement (FTA) signed by President Yameen with China in November, and his enthusiastic endorsement of Beijing’s Belt and Road Initiative, which New Delhi has rejected on the ground that it passes illegally through PoK, spurred long-standing Indian concerns about strategic encirclement by China.

Days after the FTA was signed, India’s Ministry of External Affairs spokesperson Raveesh Kumar told journalists that given the “strong historical and civilizational linkages… It is our expectation that Maldives will be sensitive to our concerns in keeping with its India-first policy.”

Quizzed on President Yameen’s visit to China in November last year, however, he said “as long as development of bilateral relations between the two countries can contribute to peace in the region, we should welcome that.”

Asim told the media in Male that the free trade pact with China would not dent the archipelago’s relations with any of its other allies. “Especially our neighbour India; we have maintained a very old, close friendship with that nation,” he said.

“That’s just it,” a senior Indian diplomat requesting anonymity said. “President Yameen had categorically told us earlier that he would sign an FTA with India first. Yet he rushed this FTA with China through Parliament in a matter of minutes at midnight, despite opposition members protesting that had not received enough notice. Is that how you treat an old friend?”

Another diplomat, however, said Yameen’s “displeasure with India could perhaps have to do with the fact that we seem to prefer to deal with former President Nasheed. That was why he passed strictures against local councilors who met Indian High Commissioner Mishra in Male in December, and barred local officials from meeting diplomats.”

The Indian Army and the Maldives National Defence Forces ended the eight edition of a joint anti-terror military exercise in Belgaum recently.