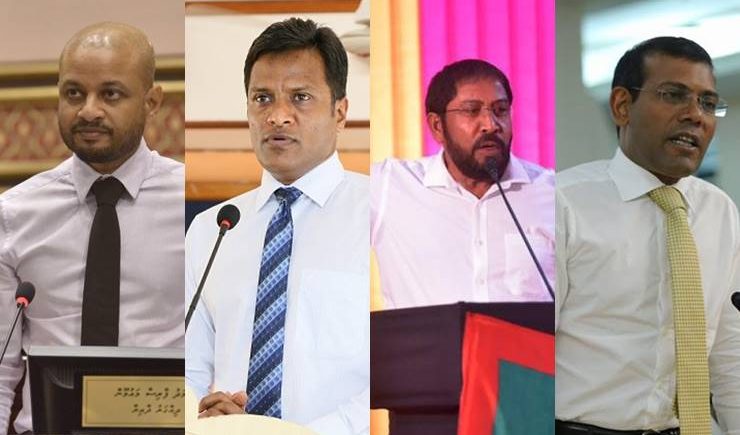 The original Dhivehi article was published on Vaguthu.mv website on 12th April 2017. By Musharraf Hassan

It was in 1953, the lineal sultanate rule was abolished in the Maldives. Mohamed Ameen Dhoshimeynaa Kilegefaanu took the lead to introduce Maldives to a republican system and became the first President of the Maldives. Since then 7 presidents has taken office and next year there will be an election to appoint a new president. Who will contest against the incumbent President Abdullah Yameen Gayoom is one hot question asked around in the Maldives’ political sphere.

Ex-President Mohamed Nasheed is a president hopeful in the 2018 election. Jumhooree Party leader Qasim Ibrahim also has the same aspiration. And if given the chance, same goes for ex-Vice President Dr. Mohamed Jameel Ahmed and Maumoon Abdul Gayoom, or he will announce a candidate instead. Former Minister of Home Affairs Umar Naseer has already announced his candidacy.

Maldives Democratic Party (MDP) will walk into the presidential race with President Nasheed. 1st, 2nd, 3rd is also Nasheed. Since he’s tangled in a prison sentence his chances are highly unlikely. Now while taking refuge abroad all he does is try to achieve his goal of ruling the country again, through the assistance of international bodies. If Nasheed cannot contest then MDP has decided to support whoever Nasheed endorses. So amongst this hue of yellow ( the colour associated with MDP party) emerges Abdullah Shahid, who goes around to every household in the country, creating an illusion in the name of ‘council election campaign’; although in the presidential race, he won’t stand a chance.

For the presidential elections, the person who has already launched campaign is ex-Home Minister Umar. His chances are along with President Maumoon and JP leader Qasim Ibrahim. It is Umar’s biggest desire to run for the presidency, though sensing he might not stand a chance with Progressive Party of Maldives (PPM), to sail in the JP’s vessel of Qasim with the help of President Maumoon. In this journey in order to facilitate this through Maumoon’s full support, guidance and assistance) he has even planned on to name Maumoon’s son Ahmed Faris Maumoon as his Vice President. Unfortunately, Umar who ran and fell to the bottom in the 2008 election, is likely to be eliminated even sooner this time. And it would be Maumoon and Qasim who would do that. Not to mention, due to the fear of the corruption scandal that might surface about the Maldives’ 50 celebratory activities’ lighting up lead by Umar, many believe that Umar is not the solution.

Qasim is a famous magnate who has contested in the past 2 elections and came in the 3rd and 4th place. Since he has the money his close aides counsel him saying that he can do ‘anything’ he pleases, backed also by his strong desire to place the title of president in front of his name, even if it’s for a short time; leaves him contesting incessantly. However, Qasim is no more a choice; he is surrounded by bribe and corruption allegations now. Moreover, according to the constitution, he is no longer a qualifier. Even if at the last minute Maldives’ constitution changes and he gets the opportunity to contest he doesn’t possess the necessary education, experience, courage nor the steadfastness which calls for in a presidential figure. Can’t say that he might also not resign during mid-term like Nasheed did.

In the presidential election equation it is still the 30-year ruled President Maumoon who pose as the most smartest. Along with the constitutional restriction and him being over 80 years now, President Maumoon’s all bets are on his eldest son Ahmed Faris Maumoon. He is relentlessly working hard to elect his son as president with the help of the good territorial relations he established during his 30-year reign.

He knows that Nasheed is fettered. Since Qasim will gripe over wanting to become president, to get rid of him he came looking to incite him to err. While Qasim was keeping quiet, after visiting him at the rally hall Kunooz, brought Qasim to frontlines, and Maumoon scrammed. Former Defence Minister Colonel (Ref) Mohamed Nazim is in jail. The next awaiting in line to contest for presidency is Umar Naseer. And then Jameel and Colonel Nazim. When ex-VP Ahmed Adeeb slaughtered them all, Maumoon kept silent minding his own business.

Maumoon is also aware that except Nasheed the rest are not capable of coming to power on their own. For this reason after going public with MDP all he does now is actively seeking blessing of President Nasheed’s for Faris. Every night at rally hall after each meeting, over a plate of bondibaiy (famous local dessert – sticky rice) what Faris is doing is an orientation before entering into the political sphere. If Faris get’s to be the candidate of the opposition coalition to contest against his half-brother Yameen, in the next year’s election, it would be one of the greatest joys for Maumoon since 2008.

MDP member’s should really think about this: it is starting to shape into a long term plan by President Maumoon and President Yameen – if the rival candidate is Faris, there is the possibility in the near future for Maumoon’s family to rule for another 30-years. That would only mean that Maumoon would also want Yameen to be re-elected in 2018. And when Yameen’s two terms are over, Faris will be all the more ready to face the 2023 election.