The original Dhivehi article was published on Avas.mv website on 12th August 2017.

With claims of heresy against Prophet Muhammad’s Sunnah, are there parents who are refusing to have their children vaccinated? Are there parents in the Maldives who are still not allowing their children to go to schools, claiming it is unreligious? As per Gender Ministries statistics, there were 5 cases of parents refusing to send their kids to schools in May this year, and 2 cases were submitted during the month of June. This shows that the consequences of the spread of extremist religious views remain. Due to extremist Islamic ideology, some brainwashed people do not hesitate to carry out heinous crimes.

Even in the gruesome killing of the famous Blogger and Social Media Activist Yameen Rasheed, Police investigations revealed religious extremism was the motive behind his murder. His murderers cited Yameen as abusing the religion, as the intention of killing him. The investigation also revealed that the killers cited that they give zero-tolerance for anyone who abuses Islam. This made them take the Shariah and Law into their hands and committing this hate-filled crime. This took place, while the dust has not even settled on the murder of a great influencer and scholar Dr. Afrasheem Ali, who practiced moderate Islam. The Police, however, has still not uncovered a motive behind his killing. Then there is the case of Minivan News’ (now Maldives Independent) journalist Ahmed Rilwan, who vanished after receiving several death threats, which also happened recently.

There is no end to Maldivians going to Syria in the name of Jihad and joining extremists groups. So when we put the whole picture together we see widespread extremism in the Maldives, accelerating at an astonishing speed. Due to the spread of such poisonous ideologies, it is evident that related atrocities are increasing daily.

‘Friend’ of the juvenile delinquents

In order to identify the reason why Maldivians go and join the war, the MNDF’s Counter Terrorism Department conducted a research last year, which revealed that the major target of those spreading extremist views were young criminals. The recruiters manipulate and convince the naive youths, telling them in order for them to be pardoned of their crimes and to go straight to heaven, would be by becoming a ‘jihadist’ in the name of Allah. The vulnerable victims who are in a state of despair, then are foolishly lead to believe that they have no choice but to become a ‘jihadist’. These kinds of recruiting: preying on the vulnerable, fooling them, pretending to be compassionate — this brainwashing propaganda, radicalisation is growing at a rapid speed, in a clandestine manner. Unlike earlier, those preaching groups are no longer out in the open. Back then, those groups formed congregations, did their version of Friday prayers openly and there is no stopping to that.

Some of those perpetrators involved in major homicides left Maldives and joined the war in Syria. The others involved in group homicides who were arrested for repeated crimes, who became radicalized, are eventually leaving to fight in the Syrian war. The Counter Terrorism Unit’s research says that there are 60 radicalized Maldivians who have gone to fight in the Syrian war and most of them were labelled as notorious criminals. However, some other research estimates it to be around 100.

Extremist Ideology spread to the max

A member who previously belonged to one of those groups, in anonymity, said even now those groups gather in mosques, delivers the sermon and prays in a congregation (the mosques’ names were not revealed to maintain confidentiality). Some religious preachers (sheikhs) will also go and meet these groups in mosques and preach them, thereby encouraging them. Likewise, recently, after the murder of Yameen Rasheed, a sheikh preached and condoned the Yameen’s killing act. Some of them whom the police suspected as his killers, had attended that preaching as well. During last year a religious preacher shared on Facebook an audio clip report saying the Syrian war isn’t a civil war but a genocide against Muslims. He also said that those who are saying it is a civil war and not a ‘jihad’ are spreading misinformation amongst the Maldivians. Basically, the sheikh’s sermon encourages people to go to Syria for ‘jihad’.

The ideology has crossed the red line

With such extreme religious views reaching uncontrollable levels, the capital city Malé recently avoided a planned massive bomb attack that would have shaken the whole of Maldives, just narrowly. In April, Maldives police arrested radicals and confiscated bomb making materials and related chemicals, in a place near Bisburu (roundabout in Maafannu) area. The masterminds of this horrific act are currently being tried in the court.

It is revealed by the secret police,  that they were planning on detonating bombs at 5 points in Malé in that foiled attack, which includes attaching explosives on a pickup vehicle to blow up the market area. These people were brainwashed and radicalized to the extent that they even pray as per Al-Sham or Syrian time. They believe that Maldives is a secular place. If they are unable to go to Al-Sham or Syria, then they believe that Jihadi acts needs to take place in the Maldives instead. In order to prepare the young recruits for such an environment, different training programmes are believed to be conducted in the Maldives, which lead the youth’s to believe that blowing up and killing people is what jihad* stands for in Islam.

Too dangerous to ignore

Research shows that those who fall prey to extremist behaviour are those who are unable to get out of an unhealthy, some form of addiction or a bad situation. These ideologies are introduced to these through a friend or social media. Or through a newly found friendship. It is especially those who had no previous religious inclinations, who easily fall victim to such tendencies. Research also shows that since they had no previous detail religious information when bombarded with the extreme ideology, they tend to believe that it is the right (holy) path. Based on what the police has revealed on Yameen’s killers, even though, they have had basic education, they are not qualified enough to discuss and give opinions or preach about the religion. However, they committed the gruesome crime based on a religious justification.

Some of those who have been accused to have travelled to Pakistan, Afghanistan and Yemen, joined and worked with big terrorist organizations, have returned to Maldives and are living freely. The Maldivian and the US intelligence did spy on some of them. However, since they are not being monitored well, these people are back on the field to recruit and radicalize people. Whilst everyone’s focus is on the current political instability of the Maldives, people with the extremist ideology, are making most of the opportunity to spread their ideology, recruit as much as they can and to come up with mastermind plans. It is claimed that some businessmen also gets involved, making the situation even more delicate. 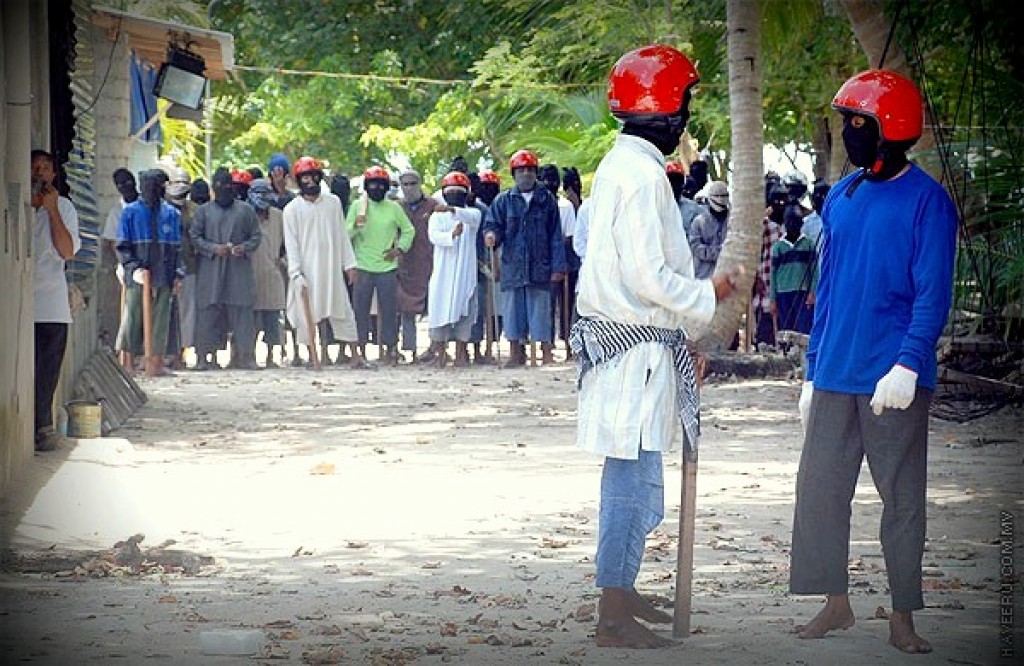 Albeit, if this poison of extremism keeps spreading, the history might repeat. There was an explosion in Sultan Park in 2007 and several more bomb attempts were made. During the Sultan Park bombing, some tourists were injured and the Maldives’ tourism fell into a pitfall. During the same period, there was a big mob confrontation in Himandhoo island and bloodshed took place. For a country with a tourism based economy like the Maldives, these incidents cannot be allowed. Even though we might not be aware, there are people amongst us who are steadfast in spreading these extremists ideology. They are advancing and its danger is nearing towards our heads. This is not something to be taken lightly and it has certainly become a nationwide problem.

*Jihad used today by groups such as the Islamic State group (ISIS/ISIL/Daesh), is vastly misinterpreted and misused to hide their odious intentions behind a term, which in Arab and Muslim societies are prized, undermines the centuries of academic and theological struggle, which held a cultural value.