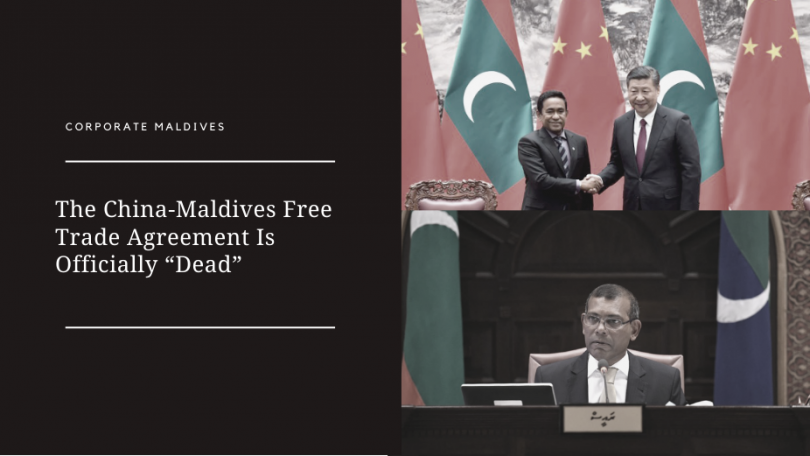 In 2017, witnessed by President Xi Jinping and Maldivian President Abdulla Yameen Abdul Gayoom, China International Trade Representative (ministerial level) and Vice Minister of Commerce Fu Ziying and Maldivian Minister of Economic Development Mohamed Saeed, on behalf of their own government, signed the Free Trade Agreement between the Government of the People’s Republic of China and the Government of the Republic of Maldives at the Great Hall of the People.

A year after this, Ibrahim Mohamed Solih was elected the new President of Maldives, almost bringing an end to the surprisingly close relationship between Maldives and China. During 2018, Nasheed, former President and current Speaker of the Parliament, said that it was a mistake to sign the FTA. “The trade imbalance between China and the Maldives is so huge that nobody would think of an FTA between such parties. China is not buying anything from us. It is a one-way treaty.”

In an interview given to ’The Hindu’ during his ongoing visit to India to participate in the World Financial Forum, Nasheed reiterated his sentiments regarding the loans borrowed from China by the former administration of President Abdulla Yameen Abdul Gayyoom. “China must reduce the debt to an actual and factual level, not the inflated prices they have given. I don’t think our parliament will want to go ahead with the Free Trade Agreement as well. We have a good relationship with China, but their terms of debt financing must be reconsidered.”

The FTA between Maldives and China was the first bilateral FTA the island nation signed with a foreign country. According to China FTA Network, the agreement was to enhance the wellbeing of the two countries’ enterprises and people. In terms of trade in goods, the agreed zero-tariff products and their import amount of the two sides both account for near 96%. It was also stated that Maldives’ most superior export products such as aquatic products will also enjoy zero tariff. However, during the Parliament Sitting yesterday, Finance Minister Ibrahim Ameer was questioned on why Maldivian fishermen are not benefiting from this agreement.

“China- Maldives FTA was rubber-stamped overnight by the parliament under strict orders from President Yaameen. It never went through the full parliament process and none of the MPs saw the agreement in full. The FTA is “void ab initio” as one might say!” said Ali Azim, MP of Medhu Henvairu Constituency.

China was not quiet on Nasheed’s several remarks on the agreement. In 2018, Chinese foreign ministry spokesman Geng Shuang said that the FTA is based on friendly and equal consultations between both countries. “It is mutually beneficial. The early implementation of the agreement will bring benefits to the two countries at an early date. We believe the Maldivian government will make the right choice in this aspect.”

However, with the statement by Nasheed during the last Parliament Sitting, it can be said that the Maldives has officially pulled out of the Free Trade Agreement with China.