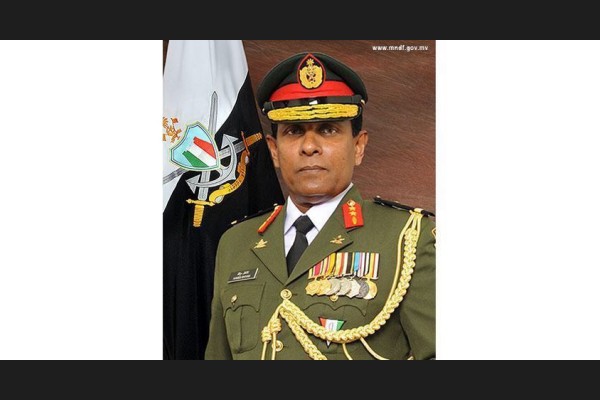 The original Dhivehi article was published on Raajje.mv website on 27th March 2017. By Mohamed Fazeen

While on the verge of casting vote of no confidence against Speaker of the Majlis Abdulla Maseeh Mohamed, MNDF’s Chief of Defense Force Major General Ahmed Shiyam has been sighted by Raajje TV’s journalists, going into the People’s Majlis’ building late on Sunday night.

Raajje TV’s journalist Mohamed Visam claims that Shiyam was seen leaving Majlis around 2:30am. Shiyam was dressed casually and was accompanied by a person who looked like an MNDF official.

When Shiyam was inside the Majlis’ building there were MNDF officials inside and outside the premise, said Visam.

While Shiyam’s was sighted at Majlis’ building and while today’s meeting began, it is claimed by the opposition MDP’s Parliamentary Leader Ibrahim Mohamed Solih (Iboo) and other members that the Majlis’ electronic voting system has a problem.

MNDF and Majlis administration did not respond to Shiyam’s sighting.

MNDF spokesperson Adnan Mohamed said that they do not wish to respond to it at the moment and if the need arises will do so. He did not deny that Shiyam went into the Majlis’ building.

A traitor to the nation

I agree he might do. My uncle is an #asswhole.