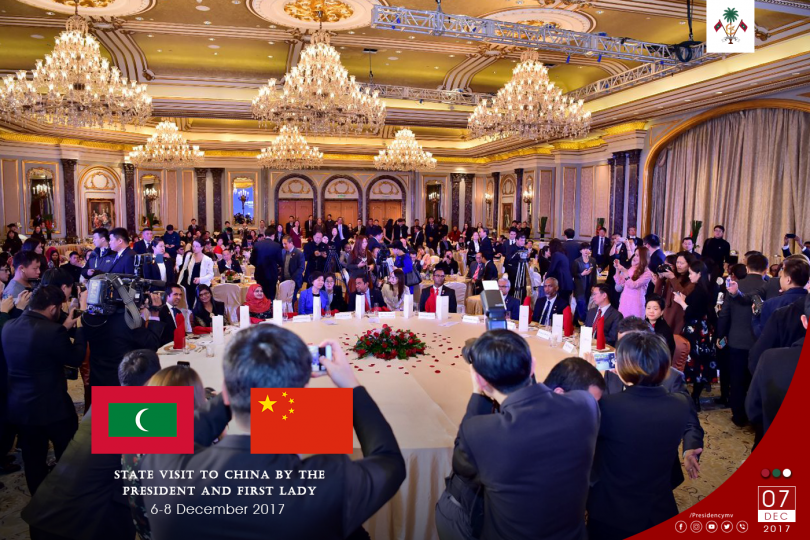 President Xi Jinping of China has described the collaboration between China and the Maldives as a wonderful, model partnership that could happen between a large and small nation. The Chinese President made this remark at the official talks held today between the Government of Maldives and the Government of China, as part of President Abdulla Yameen Abdul Gayoom’s current state visit to the country.

The official talks between the Republic of Maldives and the People’s Republic of China led by President Abdulla Yameen Abdul Gayoom and President Xi Jinping respectively, took place at the Great Hall of People in Beijing.

In his remarks, President Yameen highlighted the countless contributions China has made towards the socio-economic and infrastructure development of the Maldives, and expressed his gratitude to the President, Government, and the people of China. President Yameen and President Xi Jinping also discussed avenues of further collaboration between the two countries, especially in the areas of housing development, establishment of integrated waste management systems, green technology, maritime cooperation, health cooperation, financial assistance, and anti-terrorism endeavours.

President Yameen underscored that the Maldivian youth population was at the center of his socio-economic development agenda, and highlighted the high number of projects planned in this area. He also shed light on the MoUs to be signed following the official talks, and conveyed his confidence that it would pave the way for both countries to engage in win-win projects that will contribute towards furthering the development partnership.

In his remarks, President Yameen reiterated the great importance attached by this administration, to its relations with China. In this regard, the President reassured that the Maldives would continue to work with China in the international arena and multilateral forums.