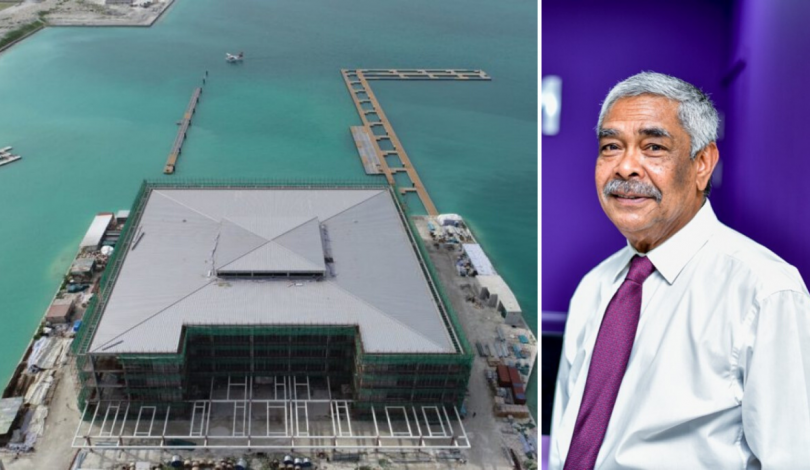 The original was published on Avas.mv on 23rd February 2020.

The new seaplane terminal’s case first came up when the previous administration decided to develop Velana International Airport (VIA) and build another runway. When looking to operate the new runway according to International Civil Aviation Organisation’s standard, there is a building by Maldives’ and also the world’s largest seaplane operating fleet – Trans Maldivian Airways (TMA), at 150 metres from the centre line of the runway.

Since the said building and land leased to TMA had to be withdrawn before commencing the operations of the new runway, Maldives Airports Company Ltd (MACL) decided to build a seaplane terminal equipped with modern sophistication at VIA’s east side of the island. And it was decided that the new terminal will also be used by all seaplane operators.

The project is an initiation under the agreement signed by MACL and Beijing Urban Construction Group (BUCG) on 14 September 2017, for USD 55.5 (MVR 855.8 million). The funds raised for the project came through a bank loan obtained from China Development Bank for USD 47.2 million and a loan taken by MACL to develop VIA from Bank of Maldives (BML) for USD 8.3 million.

The agreement was to complete the work of the new seaplane terminal within 13 months before the construction works of the new runway start. However, since the work didn’t finish by the deadline, the current arrangement is to complete by 15 July 2020 and handover it to the government.

A small price for a very big TMA

To do business, MACL issues land at the airport at a special rate. The average rate at which MACL had issued spaces for various airlines, cargo buildings and transport service providing companies, was at USD 48.7 per sqm.

However, according to the Anti-Corruption Commission (ACC) report sent to the Parliament, it has mentioned that for TMA since 2017 and for Manta Air since 2018, USD 10.35 was the rate the land space was issued. And the problem was when the land space to make airport lounge is between USD 174.94 to 314.57 per sqm, even for the new seaplane terminal, the rate discussed for TMA was USD 10.35 per sqm.

Moreover, based on the exchanges held between MACL and TMA, there was one more thing TMA had demanded. They wanted the exact size of space of their previous building at the new terminal, in exchange for the loss of their current building.

Hence, talks were held to give TMA 81% of the total land space of 15,242 sqm of the new terminal and the remaining 19% for the rest of other seaplane operators. The word was that the rest of the space allocation was distributed as 10% for IAS, 6% for Manta Air and 3% for Villa Air.

It was noted in the report of ACC that MACL drafted an agreement to develop the new seaplane terminal, shared and finalised the draft with TMA. And phone call conversations were also held between the parties in relation to the signing of the agreement. According to the draft agreement, the major portion of the new seaplane terminal was planned to be given to TMA for a small rate for 15 years. However, during the transition of the governments, there were no signed documents to substantiate this.

As per the special audit report compiled by Auditor General’s Office, MACL’s revenue from the terminal will be USD 5.7 million (MVR 87.8 million) if the agreement between MACL and TMA were followed, however, if TMA were not given a special rate, and if leased under a competitive bidding process based on the current market price, the government will receive an earning of USD 41.7 million (MVR 729 million, the office had estimated.

Therefore, to ‘swallow up’ government’s share of the revenue in billions was a serious crime.

MRO facility: what is it?

Maintenance Repair and Overhaul (MRO) facility is important for all seaplane operators to repair and maintain their planes. Thus far, the MRO facilities belong to Maldivian and TMA.

While there is an MRO facility for Island Aviation at their seaplane terminal, MACL decided upon TMA clearing the land space, TMA will be the operator who will only require it. Therefore, discussions were also held to give the new MRO facility to TMA, to develop it to the international standard at the new seaplane terminal for USD 5.4 million. And that was also planned to issue at USD 10.35 per month rate.

It creates a great challenge for other operators. And in the meeting with the Financial Committee of the Parliament, Manta Air’s senior official has said that whenever a seaplane had a mechanical issue and they go to TMA’s MRO facility, they refuse to serve. So they had to go to Island Aviation’s MRO facility to get service.

TMA’s rival – Manta Air, believes that when TMA is given MRO facility it hampers the progress of other businesses in this field. Instead, Manta Air wants the facility to be in use for all. The ACC had also highlighted this matter.

When the whole project has been designed to benefit TMA in all aspects, when the case has surfaced, the parliament, ACC and the audit office started a probe. In page 15 of the ‘secret’ report that ACC had sent to the parliament, it says that, although MACL has held discussions with all seaplane operators, it had sent a draft agreement only to TMA.

Therefore, it can be claimed that the new seaplane terminal’s bigger part agreed to be given at a lower than the market price, was done so in a move to help gain an unfair benefit for TMA. While ‘Avas’ had a leaked copy of the special report that has been done by Auditor General upon the request of the Financial Committee of the parliament, it had noted that MACL had had discussions for a deal which incurs a huge loss for the government and where TMA benefits from it.

Furthermore, while ACC has also highlighted that discussions were held by MACL with TMA and Manta Air for issuing airport land space for a monthly rate of USD 10.35, when checks were made to see if the top officials of both companies and MACL board members had connections, both parties had business and family links.

Looking at the current board of MACL of this current government, Ibrahim Noordeen is a brother in law of President Ibrahim Solih. He is the father of Sabra Noordeen who works at the President’s office. Additionally, he is also the board member of Manta Air, Champa’s Crown Company and Tree Top Hospital.

MACL’s current board’s Mohamed Sattar is Champa’s nephew and Champa’s Madivaru Holding company’s shareholder. And MACL board’s Fathimath Muaza was the Company Secretary at Commercial Bank in 2016. Since MACL hasn’t had a managing director for over a year the current acting MD is Mohamed Solih. He is the uncle of President Solih.

How both presidents are dragged into this

While the case drew a storm of criticisms aimed at the government, Speaker of Parliament Mohamed Nasheed started saying that it is likely that the government has to give compensation for TMA. Since then he was accused of being connected to the company. However, he has repeatedly dismissed the claims saying he has no ties to the company.

However, on social media, several allegations were made against him indirectly connecting to him. One is that the PR service is provided by Atoll Communication company. This used to be a company where the President office’s Policy Secretary Aminath Shauna previously held shares. The company used to be called ‘Shauna and Roberts’. However, ever since taking the new post at the President’s office her husband Mohamed Tharig now holds the shares. And when TMA’s scandal had erupted, he was the one who made the communication to the media.

Amidst the claims saying that Bain Capital (BCSF) who has 80% shares of TMA having a strong influence over the government, the company’s lawyer Jared Genser was President Nasheed’s former lawyer, said MP Ahmed Usham. Followed by allegations against Nasheed.

Amongst them, one claim was that Jared Genser requesting to individually meet several members of the parliament’s Financial Committee.

Accusations at the former administration, yet silence

According to the accusations made by President Nasheed and members of the Parliament, the issue stemmed from the previous government. It is claimed that they tried to go for a deal where TMA gains and the public loses a large amount.

After remaining silent, when MDP members individually raised questions at selected MPs, they denied it. However, when the case has come to a close, the opposition didn’t give any attention. Seems like a greater power than the opposition or government had them in control.

Where the current case is at: saved for now

According to the audit report, the estimated loss for MACL will be lower than what was previously forecasted when TMA is compensated with a 6400 sqm land space. The government had decided after the 2 years leased period is over, to go for an open bid.

Although TMA will be given 6400 sqm, other operator’s terminal space percentage was not increased. The remaining was set to be leased in a tender.