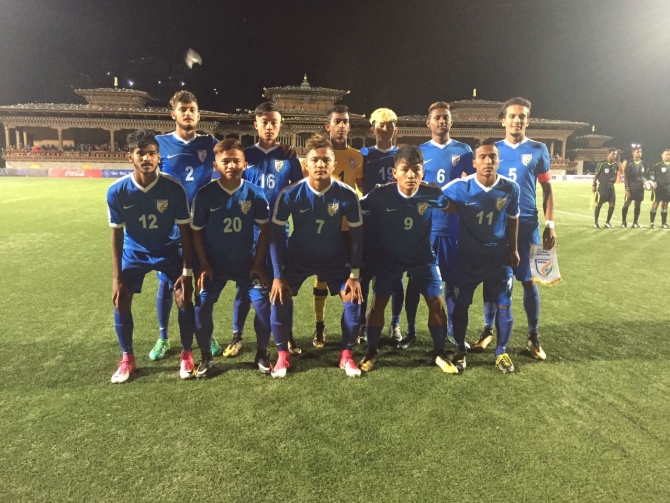 India U18s registered a 2-1 win over Maldives in their third match in the 2017 SAFF Championships at the Changlimithang Stadium in Thimpu on Monday.

Two well-taken first-half goals from Rebello Princeton and Abhishek Haldar enabled the young Blues to crawl back into the game after going behind to a 18th-minute goal by the Red Snappers.

India went into the game with an unchanged lineup from their comprehensive 3-0 win against Bhutan on September 22.

The young Blues started brightly, testing the opposition keeper multiple times in the opening few minutes. However, it was Maldives who drew first blood totally against the run of play in the 18th minute.

The trailing side piled pressure on leaders and a well-deserved equalizer came in the 37th minute. A defence-splitting pass from midfield found Rebello Princeton’s run into the box and the forward allowed the ball to bounce before unleashing a powerful volley that found the net.

Four minutes later, Abhishek Halder decided to pick the ball up from midfield and run at the opposition defense. A fragile Maldivian defense stood stunned as the youngster dribbled his way out of the crowded opposition midfield to create just enough space and produce a stunning shot from outside the box that hit the net. India went into the break with the scoreline reading 2-1.

They were multiple opportunities for both the teams in the second half, with India failing to close the game out and Maldives searching for an equalizer. With the game nearing its end, Aditya Patra produced a brilliant save to secure India’s 2-1 comeback win against Maldives.

India is now second in the SAFF U-18 Championship table, with six points from three games. Bangladesh is top of the table with two wins from two games and India will hope they lose points in their game against Nepal, scheduled to kick off later today.