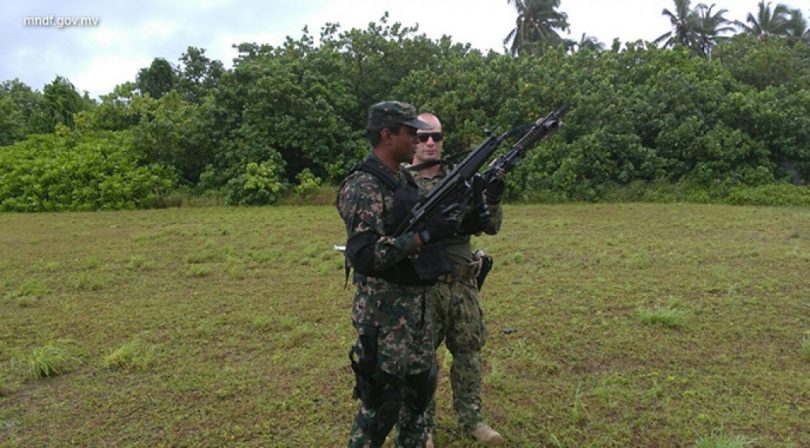 A US Army officer trains MNDF official at a previous training camp.

The local army camp released a statement affirming that MNDF does not have any schedules to pool military resources for a co-op training camp between Maldives and Myanmar. The statement comes shortly after a foreign newspaper had reported Maldives along with India and Myanmar were attempting to initiate a joint military encampment.

MNDF went on to further stress that the local army has no interest or any future plans to be put in motion for a joint military training with Myanmar.

A high ranking Indian army officer was quoted by The Times Of India, stating that Maldives, Myanmar, and India were teaming up to start a boot camp for officers of the three countries – with India being the location where training will commence.

Currently, Myanmar is under heavy media and public scrutiny for their continued mass genocide against centuries old Muslim minority; the Rohingya. Several medias across the globe have reported of thousands losing of Rohingya Muslims losing their lives while several are attempting to flee the country from facing any persecution.

The de facto leader of the country Aung San Suu Kyi faces international criticism and backlash from several humanitarian groups for her silence against the unruly acts against a minority belonging to the country. The Nobel peace prize winning Malala Yousafzai had recently called out to Suu Kyi to act upon the genocide as the “world awaits” her decision.