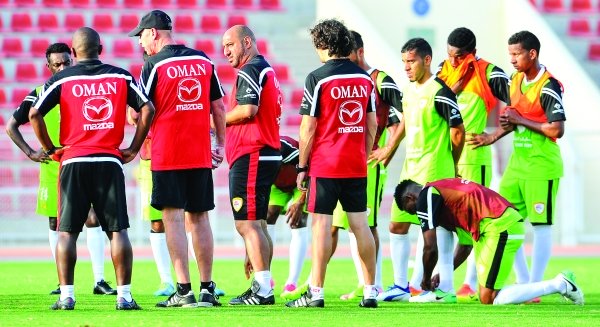 Muscat: Despite missing the services of key players, Oman are confident of returning to winning ways in the third and final qualifying round of the 2019 Asian Cup when they tackle Maldives in a crucial Group D match on Tuesday evening.

The match, scheduled to be played at the Sultan Qaboos Sports Complex, will kick off at 7.15 p.m.

Dutchman Pim Verbeek-coached Omanis, who will be missing talismanic custodian Ali Al Habsi, will be looking to bounce back from their 2-1 away defeat to Palestine back in June after starting their campaign with a thumping 14-0 home win against Bhutan.

The Sultanate squad, with three points from two matches, are currently second in the group which is headed by Palestine, who won both the matches they have played so far, including one against Maldives.

Ali Al Habsi, who recently moved to Saudi Arabia’s Al Hilal from English Championship side Reading FC, and coach Verbeek have said to have mutually agreed to let the custodian miss the match while Abbdulaziz Al Maqbali, who plays for Suwaiq, was not even picked for the recent training camp.

Speaking on the eve of the match, the experienced Dutchman said the team have prepared well and ready for the crucial match.

“We had a good preparation period for this match. The team underwent a month long camp in Austria and then we trained here in Muscat for two weeks,” he said.

Speaking about last Wednesday’s friendly match against Afghanistan, which Oman won by a 2-0 margin, Verbeek said: “The team made some mistakes in the Afghanistan friendly. We will try to avoid those against Maldives.”

“All teams are looking to reach the Asian Cup finals. But everyone is expecting Oman and Palestine to qualify from our group,” he said.

But the coach stressed the team are not taking their opponents lightly.

“Our stress is on hard work and seriousness. We want a strong performance and win full points. We will not qualify without hard work,” he said.

Verbeek informed that with the exception of Abdullah Faraj, all the 26 players who have attended the recent camp are ready for the challenge.

“Abdullah Faraj’s selection will depend on team doctor’s recommendation as the player is suffering from fever. Otherwise I have plenty of options to select the best from the 25 available players,” he said.

Meanwhile, star midfielder Ahmed Mubarak ‘Kanu’ said: ““We have faced the Maldives on a few occasions in the past and the results have been in our favour. But we are not looking at the past results. We will not take Maldives light and we will make every effort to win the match.”

Maldives’ Australian coach Darren Stewart, meanwhile, said: “It’s going to be a tough game. But we will fight for a positive result.”

“We are in the process of developing a team and we have to look better regardless of whether we qualify or not.

“I do not have much information about the Omani team. But the little information we have received confirms that they are a strong team,” Stewart said.

The top two teams from each of the six groups qualify for the 2019 Asian Cup. The twelve other teams – Australia, China, Iraq, Iran, Japan, South Korea, Qatar, Saudi Arabia, Syria, Thailand, Uzbekistan and UAE, have already qualified for the finals to be organised in UAE through the joint second round qualifiers of the 2018 FIFA World Cup and Asian Cup.