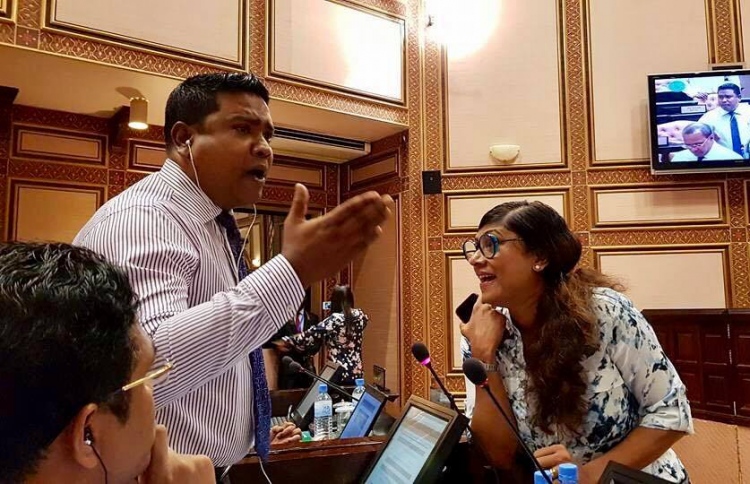 He condemned the MDP members’ actions and accused them of acting “uncivilised” inside the parliament chambers. Further, he said that the opposition parliamentarians are tainting the true meaning of ‘democracy’ by dubbing their actions as “democratic”.

Insulting the opposition parliamentarians, even more, MP Ismail had said that being inside the parliament with the MDP MPs was like being in an “animal farm.”

MP Ismail claimed that the opposition still has not come to terms with having a just president.

“It baffles me that inhumane people like [this] still get elected to the parliament. The citizens have to consider electing more virtuous people to these posts. There is nothing virtuous about any of the opposition members,” MP Ismail said in the heated parliament session that was held on Tuesday.

“I call on the Maldivian citizens to completely purge MDP from the country,” he proclaimed.

Whilst MP Ismail was giving his speech, several MDP members had surrounded his chair and continued to make noise, barring him from speaking properly.

In response to MP Ismail’s warnings, one of the leaders of MDP, Machangoalhi North MP Mariya Didi, urged him to “be very careful when [you] say that we must be purged.”

The MDP parliamentarians, during Tuesday’s sitting, continued to call for the resignation of the parliament’s speaker, Abdullah Maseeh, as well as President Abdulla Yameen.

The opposition MPs’ protests had begun after the parliament quashed their last censure motion against the speaker.