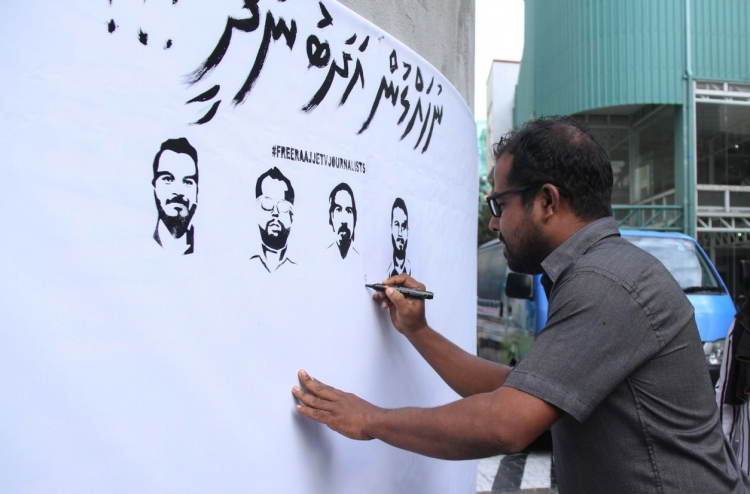 The original Dhivehi article was published on Mihaaru.com website on 9th April 2017. By Ahmed Hamdhoon

At MVR 1 million, local television station Raajje TV is facing Maldives’ biggest ever fine over broadcasting defamatory comments against President Abdullah Yameen Abdul Gayoom. It was just last Thursday that Raajje TV finished paying fine to Maldives Broadcasting Commission over a previous case, with no respite, when the tv station was hit with another and this time with a record penalty fine.

There is just one thing to find out: what was it that was live telecasted by the tv station that was deemed by the Broadcasting Commission as ‘slanderous content’ towards President Yameen?

On a regular basis live events where people are openly criticising President Yameen’s regime, his government’s speed of development and of his approach. Raajje TV was charged with this severe penalty after broadcasting live video of Maldives United Opposition (MUO)’s opposition rally at Maldivian Democratic Party (MDP)’s Haruge (meeting hall).

– Only small places like Kotharu Park (Pidgeon’s park), been developed by President Yameen and no other projects initiated and completed.
– President Yameen has never propped up an apartment building, harbour nor an airport
– Even after 3 years in office, after taking money from nation’s budget, no outcome produced
– From all that what citizens received are ‘depredation, instability, and torture’ 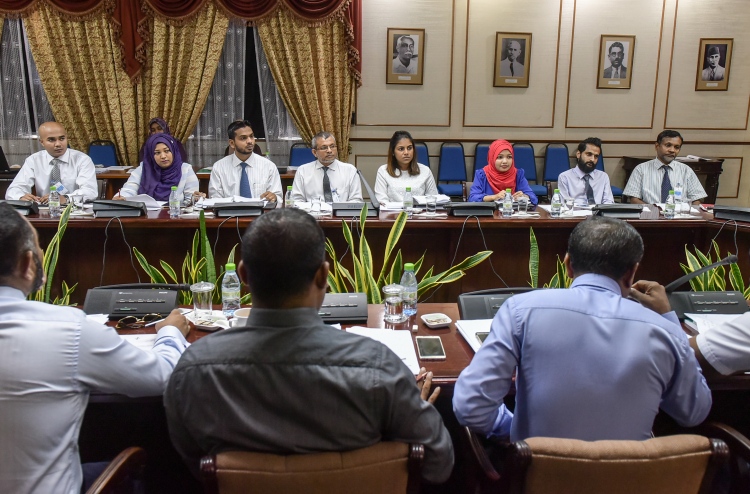 Among those 4 points, there is nothing new said by the opposition. There have been many times where tv stations have used the video in different programs and in different tv stations. We even have seen ruling party members directing towards the opposition in the same manner. But none of those times has a speech’s content has become such a big issue that it ended up with a harsh fine. So the move behind this overreaction is questionable for this reason.

Doubts are also raised especially when the commission took the initiative to look into the telecasting of such commonly found speech. Was this the only time such content were broadcasted live by tv stations?

In a recent PPM rally, Umar Naseer accused Inguraidhoo member Ibrahim Falah of defaming, which was broadcasted on channel TVM and Channel 13. Umar filed a lawsuit against TVM and Channel 13 and notified the Broadcasting Commission. But, why didn’t the commission personally looked into that case? That night, before the rally ended, Umar reported the matter to the police. The next day until Umar raised the case with Broadcasting Commission, wasn’t the commission aware that several media had already aired the video?

When the Defamation Act was enforced on 11 August 2016, ex-President Maumoon Abdul Gayoom’s reputation was first ‘slaughtered’. It also didn’t seem like the Broadcasting Commission probed the case related to the program aired by State tv station TVM on the night of 12 August 2016. TVM removed the report from their website after receiving criticisms from many.

Former President of Maldives Media Council and CEO of private tv station VTV Mohamed Asim (Mondhu), who has 25 years experience in media field is the one who is most concerned about how Broadcasting Commission is treating Raajje TV station.

Mondhu said the reason to be charged for an ‘exorbitant’ fine of MVR 1 million is mind-boggling. It is saddening when an aired video recording showing people engaged in political discourse is inferred as incriminating and indicted with a fine of an outrageous amount, to deliberately crush a media company. 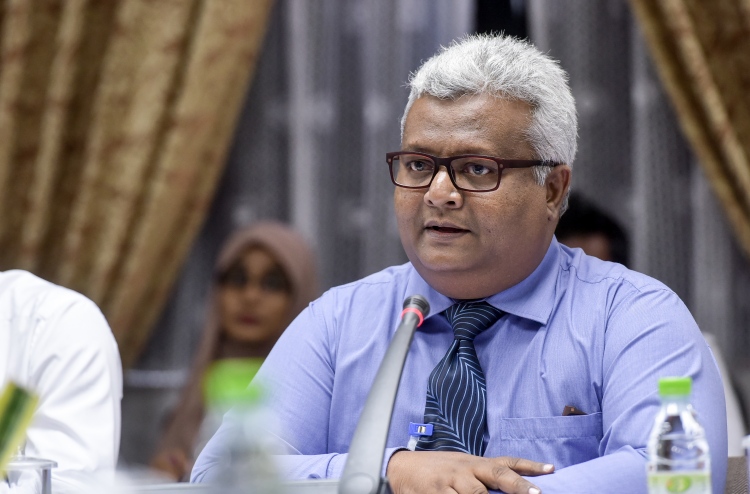 He says in a live video aired by a media if they have disparaging content then they don’t object for the steps to be taken as per the set boundaries within the law. However, at a time when Raajje TV and other media content is constantly being improved to comply with the standards to be hit with this massive fine is difficult to process. Especially if there was any person in the commission who recognized and appreciated the work done by Raajje TV for all these years they won’t commit such an odious act.

“I wonder in what fettered situation are these people in? What is the authority behind them being influenced in such way? If they know the struggle of Maldives’ news agencies and how they operate they wouldn’t stamp with a MVR 1 million fine. The commission has slammed an extraordinary amount of fine for Raajje TV.” said Mondhu.

When they know before hand that Raajje TV will be imposed with such a huge amount of fine some people in the commission would have had the chance to lobby with media groups to amend their content in order to lower such fines.

“People in the media organizations know each other. The picture that we are seeing now is that there is a desire to just punish.” Mondhu said.

The seniors of Raajje TV station doesn’t see 1 million Rufiyaa fine charge as a minor matter. This is a serious matter which opens the door for Raajje TV to be driven to a different direction. 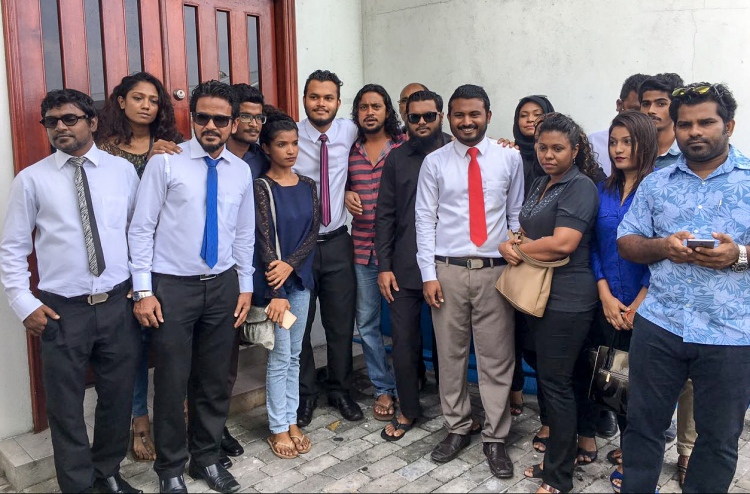 “So if Raajje TV is penalized for such content, what can you talk about in this country? As per under the government fishing insurance scheme – government promised every fisherman will receive a basic coverage of MVR 10,000, regardless of the catch, but if a recording of someone disputing that government’s scheme is aired, the government will take legal action against them. It was President Yameen’s government’s one of the pledges to create 94,000 jobs, but saying that, that amount of jobs hasn’t been created can be highly considered as damaging to a government senior. If President Yameen’s pledges are not met it can be considered as causing harm to his reputation too.” he said.

Fiyaz pointed it out, that Raajje TV didn’t violate the Defamation Act, which was passed to curtail freedom of the press in the Maldives through libel laws. Raajje TV station gave out legal justifications in its defence, but the Broadcasting Commission dismissed it. Fiyaz said this is also an issue.

“This is our problem when news agencies violate the law and action are taken it is acceptable. However, they have to be fair. They have acted as delinquents. No good will come out from bad.” Fiyaz said while directing to Broadcasting Commission members. 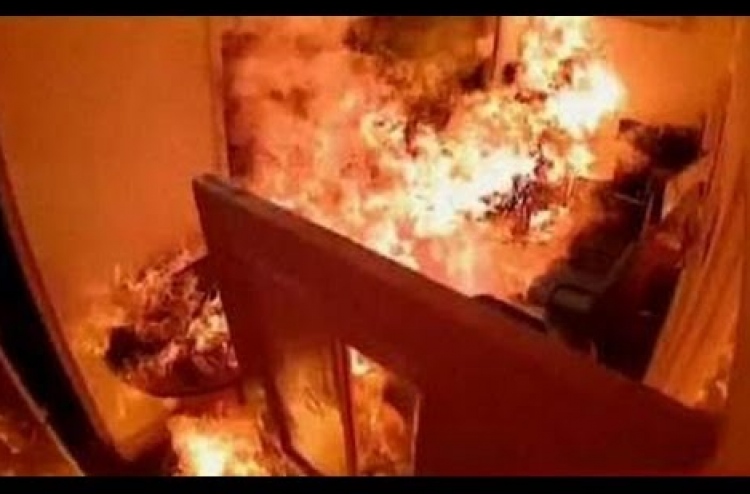 “I believe that those 7 members at the Broadcasting Commission are a danger to Maldives press. Raajje TV will be shut down before 2018. Some seniors of this government have even implied that to me. Not just Raajje TV, but they will shut down any news agency that operates freely and responsibly in the Maldives. From what we are seeing now, this won’t come as surprise.”

According to Fiyaz Broadcasting Commission is corrupted. 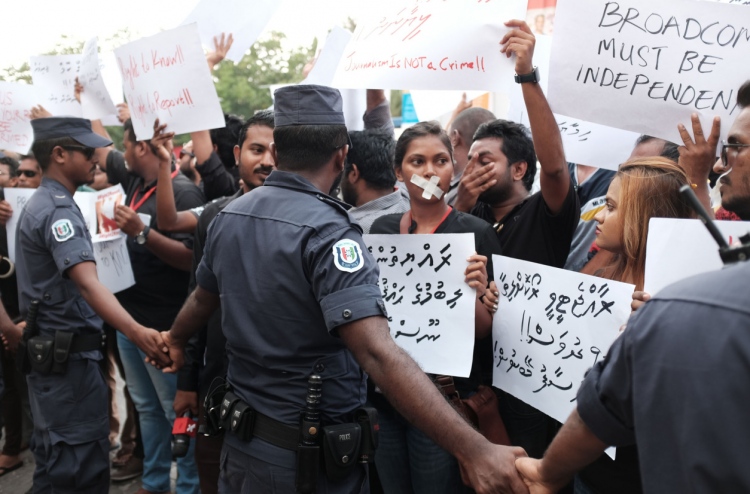 “Members at the commission’s names will be smeared in black in history. Or else they won’t take own initiative and drag what’s said by politicians on social media to the commission. There are worse things said by politicians in the media. So it goes on to show that they are going forward following a timeline to get rid of Raajje TV pointing finger at anything.” he said.

He said they won’t relent no matter how many actions they take targeting Raajje TV. The tv station will go forward in the media area.

Some people believe that with a MVR 1 million fine imposed, colours of a political agenda within the commission is revealed. Especially people in the media believe that, while heading commission Mohamed Shaheeb, who held senior posts in the media previously, took action for a critique in an area where such criticisms are atypical. These are the concerns by media agencies which are not sided with the government. When Defamation Act came into force, the claims that it was drawn up to criminalise vague and trivial things and take it out of context, is becoming a reality now.

The Commission is now not looking into the weight of any discourse but to take the most severe action against anything that poses as a threat, which is a warning that they are ready to wipe out Maldives’ press.