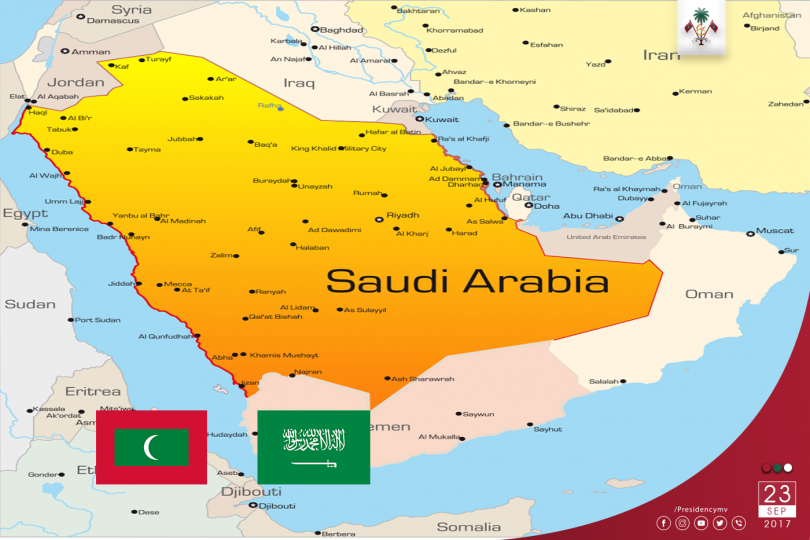 President Abdulla Yameen Abdul Gayoom has conveyed greetings and good wishes to the Custodian of the Two Holy Mosques King Salman Bin Abdulaziz Al-Saud and the Crown Prince, His Royal Highness Muhammad bin Salman bin Abdulaziz Al-Saud, on the occasion of the National Day of the Kingdom of Saudi Arabia.

In his message to His Majesty, the King, the President noted that the Maldives and Saudi Arabia have enjoyed a long history of strong and stable brotherly relations that have consistently ensured heightened progress and prosperity for the two countries and their peoples. He expressed hope and wishes that with the grace of Almighty Allah the existing brotherly ties and development partnership between the Maldives and Saudi Arabia, based on the core values of Islam, reciprocity and understanding, will go from strength to strength in the years ahead.

In a separate message to His Royal Highness, the Crown Prince, the President conveyed hope for further peace, progress and prosperity for Saudi Arabia and in extending its reach to attain world peace, security and stability. The President also emphasised his commitment to work closely with His Royal Highness, the Crown Prince to bolster the existing development partnership between the Maldives and Saudi Arabia for the common benefit of the fraternal peoples of both countries.