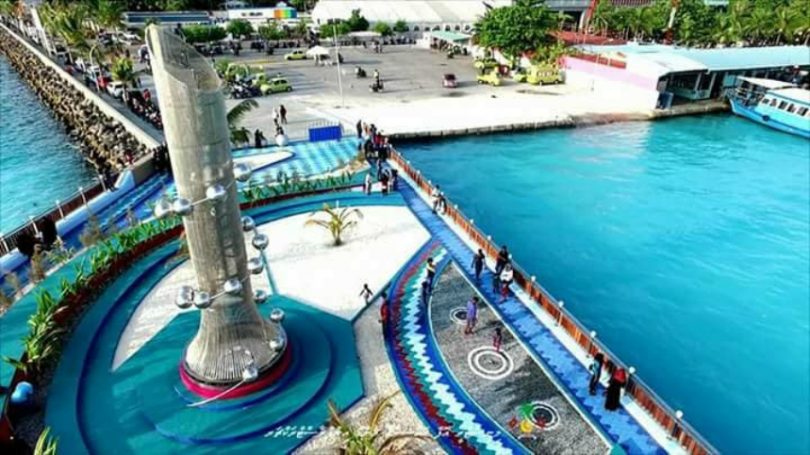 Overhead view of the Tsunami Monument in capital Male: it was built in memorial of the lives lost during the 2004 Indian Ocean tsunami. PHOTO/HOUSING MINISTRY

President Abdulla Yameen on Tuesday urged the nation to recall the unity and solidarity shown by the people of the Maldives in the aftermath of the 2004 Indian Ocean tsunami.

The president made the remark in his address to mark the National Unity Day, which is observed in remembrance of the national spirit shown by Maldivians in the wake of the largest natural disaster to ravage the archipelago in recent history.

Extending his greetings and wishes to the people, Yameen stated that the sorrowful memories of the tragic day still linger in the hearts of Maldivians, many of whom had lost loved ones in the disaster. Noting that the Maldives had suffered great losses within a short time, including extreme socioeconomic damages, Yameen urged the people to recall the team effort put in by Maldivians to overcome the loss.

Praising the love, compassion and solidarity shown by the people in the aftermath of the tsunami, Yameen stressed that it was a national duty of every Maldivian to learn lessons from the disaster and keep moving forward with unity.

Yameen also advised the people to recognize and accept the efforts of the government to bring about progress and development for the nation.

The Indian Ocean tsunami in 2004, which was caused by a massive earthquake off the coast of Indonesia, had taken the lives of 82 Maldivians while 26 were reported missing. The tsunami had wrecked several islands across the archipelago, forcing complete evacuations in some afterwards.