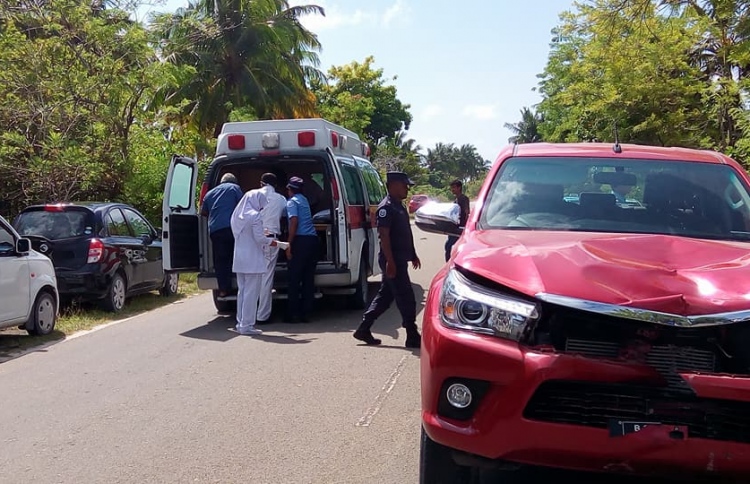 The man who was driving the vehicle that caused an accident on Addu City’s link road, which killed a 13-year-old, was arrested on Wednesday.

According to the police, the 33-year-old man was arrested under a warrant, and the vehicle, which belonged to the Ministry of Environment and Energy, that he was driving is also in police custody.

Thirteen-year-old Arsham Ibrahim passed away last Tuesday while being treated at Hithadhoo Regional Hospital for the injuries he sustained in the accident.

He was a native of Vaadhoo in Gaafu Dhaalu Atoll and was visiting Addu with a relative.

The accident occurred whilst he was on the back of a motorbike with a friend from Addu City. He was also seriously injured in the accident.

Sources close to the family told Mihaaru that it was Arsham’s first visit to the nearby Addu City and that he was staying aboard on a boat with his relative. He was on his way to meet a friend in Maradhoo, Addu City when the accident occurred. As per regulations, the two individuals on the motorbike were also wearing helmets when the incident occurred.

Arsham was a surf enthusiast and had just finished 8th grade in his native island’s school. Arsham’s family of nine siblings and a widowed mother are all famous surfers in Vaadhoo and have even been featured on several Maldivian media.

“I still can’t believe he is gone. It’s so sad knowing that such a young talent is lost. It’s heartbreaking,” a surf instructor from Vaadhoo said.

Reportedly, the 21-year-old who was driving the motorbike that Arsham was on has been brought to capital Male for further treatment.