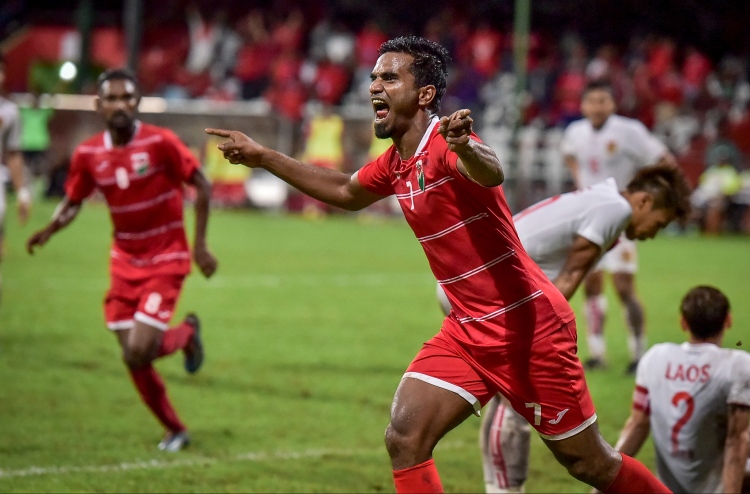 Ali “Dhagandey” Ashfaq celebrates after scoring against Laos: he is ranked the top scorer in the goals-to-appearance ratio by the end of 2017.

According to the statistics published by Times Now of India, Ashfaq had netted 52 times in 78 national matches by the end of 2017, earning him the top rank with an impressive rate of 0.67 goals per match.

In second place is the Brazillian star and currently the most expensive footballer, Neymar, at a rate of 0.64 with 53 goals in 83 matches. He is followed by David Villa of Spain at 0.60 and Edin Dzeko of Bosnia & Herzegovina at 0.58.

Indian captain Sunil Chhetri is at fifth with 56 goals in 97 matches at a rate of 0.58. He is ahead of Poland’s Robert Lewandowski at 0.56, Portugal’s Cristiano Ronaldo at 0.54 and Argentina’s Lionel Messi at 0.50.

Rounding off the list are Asamoah Gyan of Ghana at 0.48 and Clint Dempsey of USA at 0.40.

Ashfaq debuted as a footballer in 2001 at the age of 15. He rose to the national team in just three years and broke the record of most goals scored in a single national match by netting four times against Mongolia in the 2004 World Cup Preliminaries. He broke the record in 2013 with six goals against Sri Lanka during the SAFF Championship.

Ashfaq also holds the record of scoring the highest number of goals in the SAFF Championship with 20 goals. His record is followed by Chhetri of India with 13 goals.

Furthermore, Ashfaq had broken the record of most goals in a single season in the Maldives. He was crowned the best player four times and won the Golden Boot six times.

After successful stints in Club Valencia, New Radiant and VB Sports, Ashfaq had enjoyed a commendable tenure on the Malaysian league, which had earned him the title of best foreign player. He returned to the Maldives in 2016 and played the Ooredoo Premier League with Maziya Sports, before winning the league, FA Cup and President’s Cup in 2017 with New Radiant.