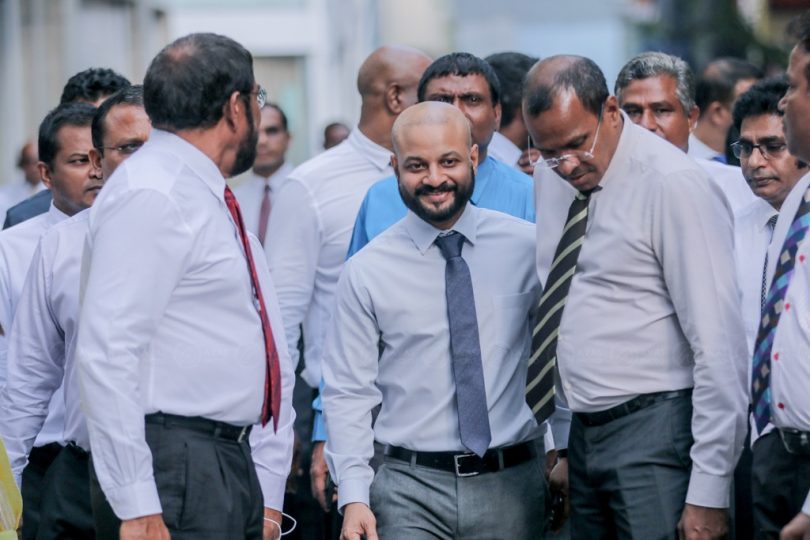 The original Dhivehi article was published on Avas.mv website on 4th April 2017. By Moosa Rasheed
The following is a loose translation:

The biggest question raised now in the Maldives is whether the opposition coalition can overpower the government. This question is raised not without a reason.

It is due to former President’s Mohamed Nasheed and Maumoon Abdul Gayoom’s sudden alliance, startling the nation. Along with them Gasim Ibrahim, Adhaalath Party and those who left PPM but who have been isolated in politics but still with the hopes of coming into power, made a loud noise. Also when political enemies, have signed an agreement to work against the government, and are proceeding with it.

However, some people feel that even after creating big waves in Maldives’ political sea, it will go forth until the time comes to make a decision to announce who will contest in the 2018’s presidential election.

“The coalition will shatter when the time comes to decide who will run for president. That’s how long the coalition will last.” said government Spokesperson Dr Mohamed Shainee, who had been speaking frequently on Maldives’ political situation.

How long will the opposition coalition stay ‘afloat’? Also, when the opposition wins over the government who will become the next person, or candidate to take the ‘throne’ and to which direction will that person’s thinking lean?

While these questions remain, of noteworthy is when the opposition works are ongoing, why is former Home minister Umar Naseer who emerged within President Maumoon’s, keeping mum?

While responding to questions posed by Avas, Umar said he doubts about President Nasheed’s loyalty. I can never trust that name. The first person to jump off from the oppositions ‘boat’ is Umar Naseer. So there came the first ‘crack’. Though it might take some time until we find the real cause of the crack to widen.

When President Maumoon withdrew support to President Abdulla Yameen’s government, the first person who joined the rebellion was Umar. At that time MDP was completely ‘paralyzed’ while waiting for the next move from President Nasheed, who was in the UK. So it was Umar Naseer, President Maumoon and his son Ahmed Faris who was seen engaged in the opposition’s work at that time.

However, when President Maumoon joined forces with President Nasheed and signed the resolution, Umar was not pleased. Even from the very beginning Umar openly criticised President Nasheed. He vowed to never take sides with him and to date, he is the only person to remain on that stance.

“Believe me when I say that I will never sit side by sides with Nasheed”, said Umar.

When things are such that, end of last month the opposition coalition announced that they will be working together in every election.

However, question was raised for Umar who has expressed interest in contesting in the presidential election, on his support following for the opposition coalition’s announcement. Will he then decide not to contest? Will he come out against the coalition? So in that situation will President Maumoon oppose Umar who stood by him in dire times or will he oppose the coalition? These are questions to ponder.

“The likelihood of President Maumoon opposing Umar are low. However, if things comes to that, Umar will contest along with Dr Mohamed Jameel of the long forgotten alliance – Maldives United Opposition. Even so, MUO will fall apart and the Shadow Cabinet will get crushed into pieces. Eventually, that alliance will break too.” said a member of PPM parliamentary group.

Jameel, will be another problem that this coalition will endure.

Next is President Maumoon’s son Ahmed Faris Maumoon. Political analysts describe Faris as someone with no capability to face an election. He was not someone who commented much in the parliament or anywhere in this regard. He was more like an outcast. However that changed when Faris stood up to support his father President Maumoon, in the war against the government. It was MDP activists who made him a man of substance, politically. Some political people believe that, this sharpened ‘weapon’ could someday jab them. Slowly, we are seeing the signs of it.

Let’s not forget what President Nasheed said while surrounded by the international media. He said that if he cannot contest in the election, neither will MDP.

So the debate goes forward on determining the current coalition’s demise and when it will happen.