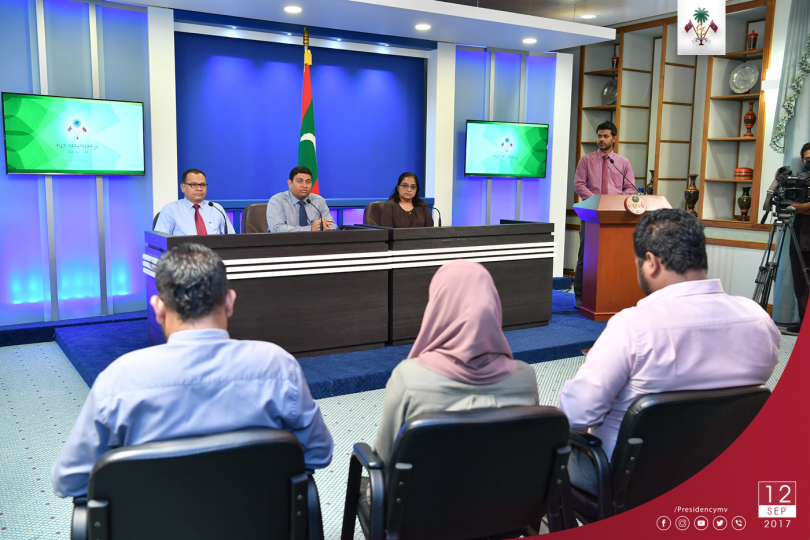 At a press conference held at the President’s Office this morning, lead representative of the Administration at the All-Party Talks initiated by President Abdulla Yameen Abdul Gayoom in 2015, Minister of Fisheries and Agriculture Dr. Mohamed Shainee has stated that no party has taken up the invitation from the administration to recommence the political dialogue between all political parties.

Dr Shainee pointed out that the opportunity to take part in the dialogues among all parties, initiated by the Administration in 2015, was still open, and that the Administration always welcomes any and all reform work aimed at improving the lives of Maldivians. Dr Shainee also underscored that the talks initiated by President Yameen was to facilitate a platform for parties with different political viewpoints, to hold constructive discussions.

Speaking at the Press Conference, Dr Shainee reassured the public that the Administration had no part in any illegal or unlawful activities, as accused by the opposition. He said that taking part in political dialogue was the way to move forward, as was practiced in all parts of the world, instead of just issuing multiple party statements. Dr Shainee further said that the Administration would not act as a reaction to a statement made to the media by the opposition.

Today too, Dr Shainee, as lead Administration representative at the All-Party Talks noted that the talks should be aimed at resolving issues related to national interest, instead of trying to protect an individual’s welfare. He once again invited all political parties to the discussion table to come without any preconditions, and with the aim of reforming the country.

The Administration’s latest invitation to take part in the All-Party talks went out to all political parties on 30th August 2017. The initiation of re-engagement was driven by the Administration’s belief that opposition parties were ready for an opportunity for national reform through dialogue, with regard to the messages being shared by the opposition via multiple platforms.