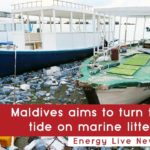 The UN Environment’s CleanSeas campaign, which was launched in February this year, calls on government to pass policies to reduce plastic and industries to minimise plastic packaging.

Maldives has pledged to launch a national campaign to reduce single-use plastics and look at reducing plastics in the oceans.

More than eight million tonnes of plastic, such as bottles and cups, end up in the oceans, costing around $8 billion (£6bn) in damage to marine ecosystems.

Abdulla Ziyad, Maldives Energy and Environment Minister said: “Marine litter and pollution is indeed a critical area of concern for our region. Addressing this issue requires us to think both at the national level and beyond.

“Integrated and holistic approaches at the local level, coupled with co-ordinated action at the regional and global level will be key in making progress towards pollution free, clean seas for all.”