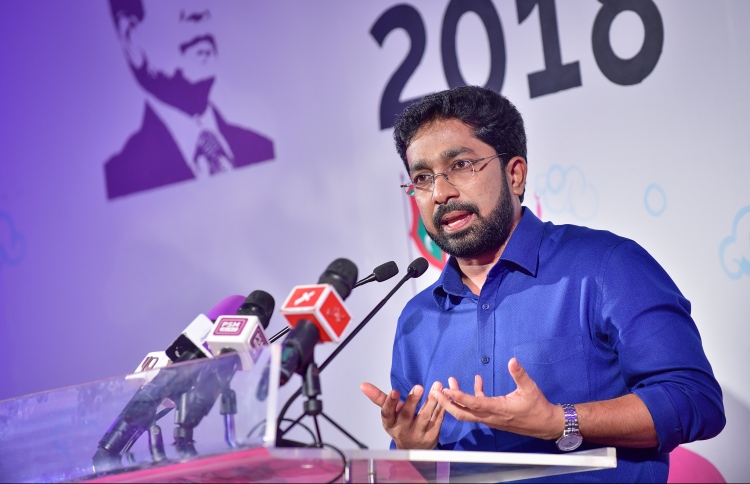 Home minister Azleen Ahmed declared late Sunday that convicts would no longer be allowed to flee the country under the guise of seeking medical treatment abroad, warning that the government would be “on its guard”.

Azleen gave the warning while speaking at a rally of ruling Progressive Party of Maldives (PPM), insinuating that authorities would not permit any other opposition political leaders, who are currently serving prison sentences, to leave the country under any circumstances.

In his speech, the minister slammed the leader of opposition Jumhoory Party, Qasim Ibrahim, who was authorized by the government to leave for Singapore for medical attention after the Criminal Court sentenced him to three years on bribery charges. Qasim had not returned to the Maldives even after his third leave extension expired, and is currently in Germany, claiming to seek further medical aid. As a result, the government had declared him a fugitive of the state.

Azleen proclaimed that Qasim had shifted from Singapore to Germany without informing the Maldivian government.

He highlighted that he and the Maldivian Ambassador to Sri Lanka, Mohamed Hussain Shareef, had visited Qasim while he was hospitalized, on behalf of President Abdulla Yameen, to check on his condition.

“He was in very poor condition [then]. But what do we see today? Everyone saw him in some mart in Singapore soon after he left. [After that] he went to Germany without even notifying the government,” said Azleen, implying that Qasim’s current health condition was a deception.

Accusing convicted political leaders of deceitful attempts to flee the Maldives, Azleen warned that the government would be on its guard henceforth, and that jailed politicians would not be permitted to leave the country despite any claims of poor health.

A number of opposition leaders are currently serving jail sentences on various charges. Religiously conservative Adhaalath Party’s leader Sheikh Imran Abdulla is in Maafushi Prison, convicted of terrorism for inciting violence during a major opposition rally. Former defense minister Mohamed Nazim was convicted of weapons possession but was recently shifted to house arrest. Meanwhile, former vice president Ahmed Adheeb is in Dhoonidhoo Detention Centre, serving 33 years for three convictions including an assassination attempt on the president. Adheeb’s family had repeatedly sought permission to send him abroad for medical treatment, claiming he was suffering from glaucoma, but the authorities had refused, stating that the risk of Adheeb absconding was too high.

However, the government had said that Adheeb would be permitted to leave once he repays all the state funds he was convicted of embezzling.

Azleen further pointed out that the policy of allowing convicted criminals to leave the country was not one followed by any nation.

Lauding President Yameen’s policies, Azleen went on to pronounce that the joint opposition would not have a single eligible candidate fit to lead the country. He referred to the online poll recently taken by opposition-aligned television station Raajje TV to find out the most eligible opposition candidate. He pointed out that almost all the choices on the poll were convicts, with former president Mohamed Nasheed representing main opposition Maldivian Democratic Party (MDP), Qasim Ibrahim for JP and Sheikh Imran Abdulla for Adhaalath. Nasheed was convicted to 13 years on terrorism charges and has been living in the UK under political asylum.

“It’s not just my word on this,” said Azleen as he declared that none of the candidates, Nasheed in particular, would be able to run for president. “Under the current Constitution of the Maldives and its courts and laws, it simply cannot be done.”