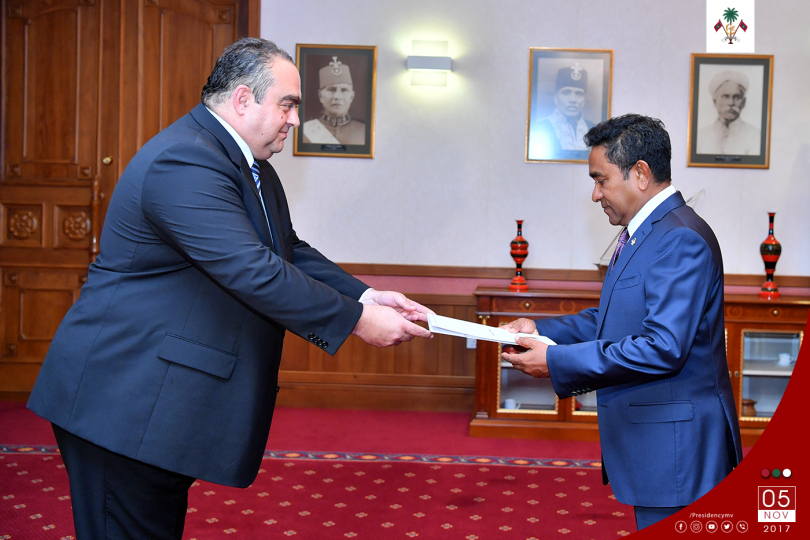 The new Ambassador of Romania to the Maldives, His Excellency Mr. Radu Octavian Dobre has presented his credentials to President Abdulla Yameen Abdul Gayoom‎, this morning, at the President’s Office.‎

At the ceremony, the President conveyed greetings and good wishes to the President, His Excellency Klaus Iohannis and Prime Minister, His Excellency Mihai Tudose of Romania, and congratulated Ambassador Dobre on his appointment. The President highlighted the Ambassador’s accreditation today, as a stepping stone to further consolidate the existing ties of friendship and mutual understanding between Maldives and Romania. In this regard, the President stated that it is a pleasure to meet with the new Ambassador of Romania, and to work with resolute commitment for the development of a more constructive relationship with Maldives and Romania. The President also expressed interest working together in exploring new areas of cooperation and towards achieving mutual benefits.

During the call, the President and the Ambassador discussed the ambitious economic transformation agenda pursued by the Government, and invited Romanian businesses to seek available investment opportunities in the Maldives. The other areas of discussion included cooperation at the United Nations and in the tourism sector.

The Ambassador pledged full support from Romania in further enhancing the ties of cooperation with Maldives, in the areas discussed and committed to and expressed hope that the existing relations will grow from strength to strength in the years to come.