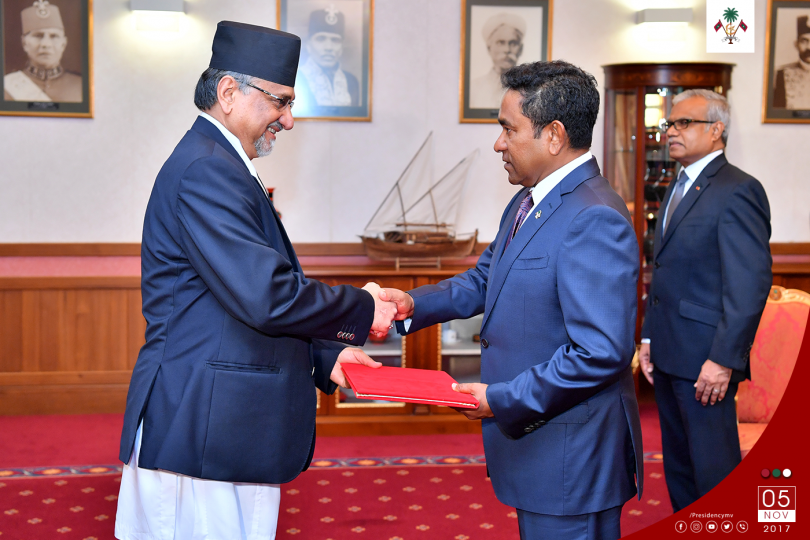 The new Ambassador of Nepal to the Maldives, His Excellency Professor Bishwambher Pyakuryal presented his credentials to President Abdulla Yameen Abdul Gayoom‎, this morning, at the President’s Office.‎

At the ceremony, President Yameen conveyed greetings and good wishes to the President, Her Excellency Bidhya Devi Bhandari and Prime Minister, His Excellency Sher Bahadur Deuba of Nepal, and congratulated Ambassador Bishwambher Pyakuryal on the commencement of his term.

During the call, the President highlighted the great importance Maldives attaches to its relations with Nepal, and thanked the Government of Nepal for the continued assistance in the development of human resources in the Maldives, particularly in the field of medical education. In this regard the President requested for the possibility of increasing the number of seats offered to the Maldivian students pursuing medical education in Nepalese Universities.

The President also expressed hope and confidence in further enhancing the level of cooperation between the two countries, through the collaboration in both international and regional fora, as well as through exploring different avenues of cooperation, during the Ambassador’s tenure.

The Ambassador stated that it is an honour to serve as the Ambassador to Maldives and also expressed interest in exploring opportunities for greater cooperation, for the mutual benefit of the two nations.

Diplomatic Relations between Maldives and Nepal was established on 1st August 1980.