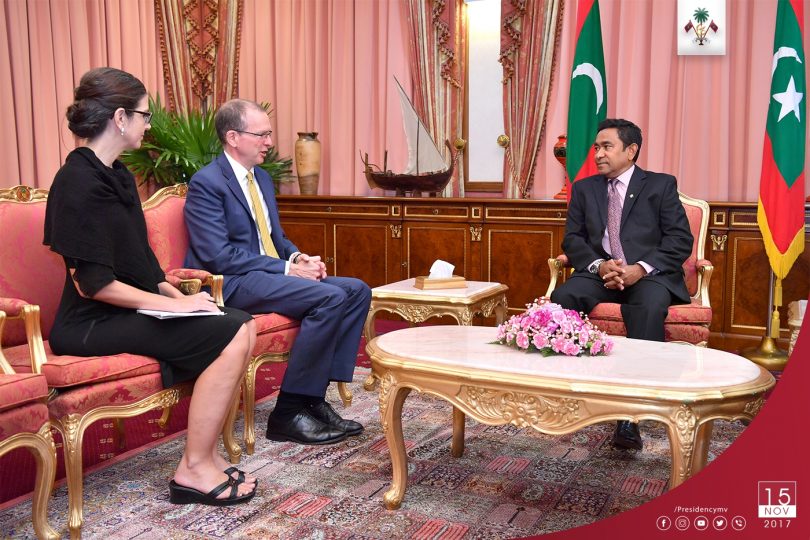 The new Ambassador of Canada to the Maldives, H.E. David McKinnon, has presented his credentials to President Abdulla Yameen Abdul Gayoom at the President’s Office this morning.

The President welcomed Ambassador McKinnon and his delegation to the Maldives and stated that the Maldives attaches high importance to its relations with Canada. He noted that this year will mark the 36th anniversary of establishment of diplomatic relations between the two countries. The President expressed his appreciation for the continued support and cooperation from Canada over the last 36 years. The President also stated that in view of the excellent relations between Maldives and Canada, his accreditation today serves as a stepping stone to further consolidate the existing excellent relations.

The President spoke about the Maldives’ role in environmental conservation in the tourism industry and pledged the full support of the Maldives to further the cause of climate change.

During the meeting, Ambassador McKinnon conveyed his assurances of Canada’s full support and commitment in further enhancing cooperation with the Maldives in the areas discussed, and to exploring new areas of collaboration.

Ambassador McKinnon also commended Maldives for the leading role it is playing in the environmental conservation arena and pledged Canada’s full support to further the cause, particularly in relation to climate change and environmental protection.

Ambassador McKinnon was accompanied to the President Office by Ms. Jennifer Hart, Political and Economic Counsellor.

Also present at the accreditation ceremony were the Minister of Foreign Affairs, H.E. Dr Mohamed Asim, and the Minister of State for Foreign Relations at the President’s Office, H.E. Mr. Mohamed Naseer.