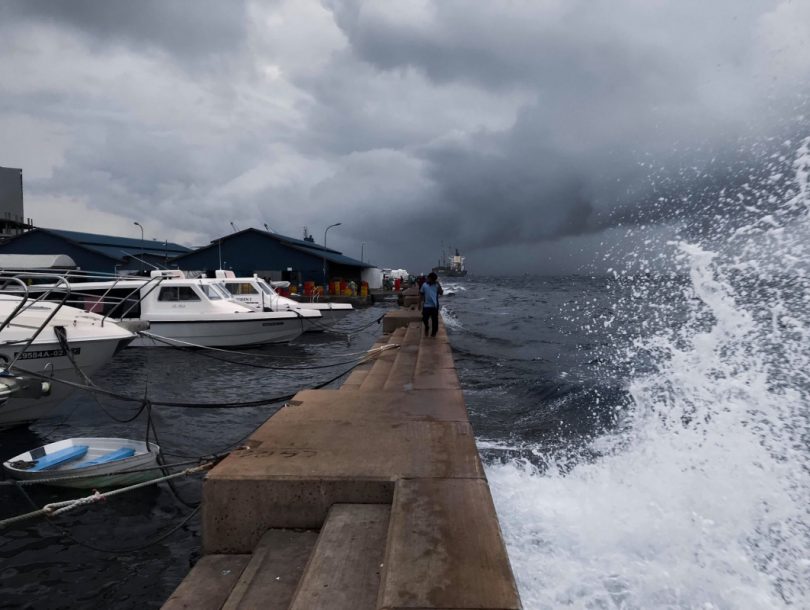 The Maldives Meteorological Service (MET office) has issued an orange alert across some regions, for the first time in the Maldives, after predicting that the monsoon depression brewing over the Maldives to evolve into a tropical storm by Saturday.

Speaking on RaajjeTV’s Covid-19 Coverage, the Assistant Meteorologist at the department, Abdulla Hafiz revealed that they predict the monsoon depression brewing over the country to build to a tropical storm on Saturday, however, the damages in its wake will be minor to the Maldives.

As such, the storm is heading towards Bangladesh, where a cyclone has been building over the Bay of Bengal and is expected to intensify by Saturday. It is expected to track towards the Maldives and cross the outlying atolls within the next 12 hours.

An orange alert also confirms that an Indian Ocean wide Tsunami of high impact to the Maldives.

With this development, the Maldives may expect rain showers and flood up to 90 millimetres in one hour or 120 millimetres within six hours, with severe thunderstorms observed through satellite images.

The department issued an orange alert over the regions between Raa atoll to Faafu atoll from 5 pm to 7 pm on Friday.

Average winds of 34 – 40 miles per hour and rough seas are expected over these regions.

The yellow alert was issued from Shaviyani atoll to Meemu atoll from 3 pm to 7 pm and the regions between these atolls are expected to experience torrential rain showers with heavy thunderstorms and strong winds of 28 – 35 miles per hour, gusting at 50 miles per hour.

Similarly, a while alert was also issued by the department. The white alert is effective from 02:30 pm to 06:30 pm between Gaafu Alif atoll to southernmost Addu City.

Generally, fairly widespread rain showers with isolated heavy rain and thunderstorms are expected over the entirety of the country with seas becoming moderate to rough in the north and generally rough throughout the rest of the country.

Further, winds are expected to increase 45 – 50 miles per hour during showers.

MET went on to urge caution against the strong monsoon activities, as swell wave surges are also expected during high tides.