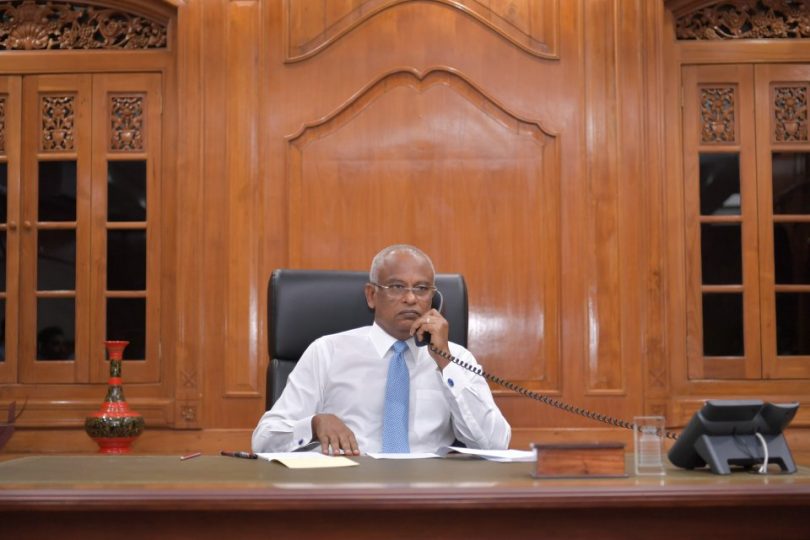 President Ibrahim Mohamed Solih says that the Government would offer assistance to cover the damages caused by incessant downpours in the Cities of Addu and Fuvamulah yesterday.

President Solih had on Monday evening checked on Addu and Fuvahmulah cities’ people in the wake of incessant downpours, which left many parts of the cities inundated.

In separate telephone calls to Addu City Mayor Abdulla Sodiq and Fuvahmulah City Mayor Abdulla Falah, President Solih inquired about the severity of the storm and damage caused due to the torrential rains, high winds, and ensuing flooding.

President Solih also telephoned the respective Members of Parliament of both cities.

During his calls with the mayors, the President inquired about the current state of affairs and deliberated with them to alleviate the residents’ difficulties.

He further assured the government is working to resolve the challenges in the face of continued severe weather.

Speaking to “The Press”, Addu City Mayor Sodiq said that yesterday’s torrential rain had damaged several houses and farmlands in the city.

He confirmed that President Solih had phoned to check on the residents of Addu City and had said that the government would offer assistance in the wake of the disaster.

Meanwhile, speaking to “The Press” Fuvmulah City mayor Falah said that 98 houses in the city had sustained damages during the downpour and that he had requested financial assistance from the President to cover the cost of the damages on by the rain.

He said that the President had assured that the government would work to secure this assistance and that it would work to further improve conditions in the City to avoid such disasters in the future.