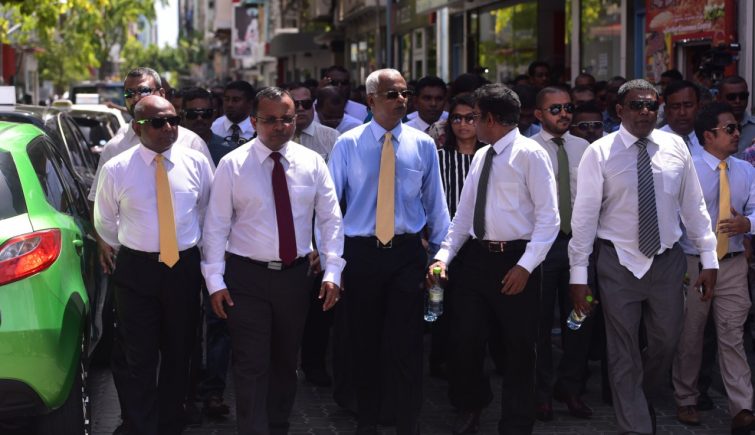 The original Dhivehi article was published on Vaguthu.mv website on 17th August 2017.

Irrespective of the small size of the Maldives with inadequate resources, there are several nations who have their eyes constantly set on the Maldives. Even after counting in the Portuguese and the British, the list still goes on. Every time Maldives’ political ship hits a rough storm, the international community adding fuel to it, is, in fact, more than just a hearsay.

Lately, the foreign countries and the international communities meddling of internal affairs of the Maldives has taken up a different shape. They now provide tactics and funds. Maldivians are left with the responsibility to paint the full picture and make it a reality.

Amidst this political turmoil, we marked the Independence Day this year. Whilst some members of the parliament faced Maldivian security forces and unrest (turbulence) emerged inside the parliament building.

From secret sources (Maldives intelligence) it has been revealed that on 24th July, the opposition’s attempt to enter the parliament building, holds many hidden aspects. That attempt was part the initial stage of a big plan. That plan was to be executed with assistance and support by a very close neighbour of Maldives.

Those aware of the plot says according to this plan, when members refuse to exit the building, an ambassador was to step in, meet the members, to mediate and settle the issue. Even though that was supposed to be just a meeting discussion, it was a major part of the whole ‘plan’. When the ambassador enters the chambers, holding him ‘hostage’ was what was planned, which was known to the ambassador as well as his country.

When they hold the said ambassador ‘hostage’, in order to release him, the ambassador’s country was to deploy their army. Even by creating a war-like situation, to have a hostile takeover of the government was a crucial part of this plan. Demanding the resignation of President Abdulla Yameen Abdul Gayoom, instead of launching their army, was ‘plan B’.

Even though, we don’t know the full details of this plan, the main part of the plan was most certainly with the support of a neighbouring country to overthrow the government.

We cannot dismiss this notion as a less likely possibility, based on how our neighbour has treated the Maldives. When President Mohamed Nasheed created a situation, during his tenure in the office, where he had to resign, this same neighbour tried to take him to their country.

The biography of President Mohammed Waheed Hassan’s, also mentions this. The ambassador of that country then tried to take President Nasheed even via sea. However, failed.

Therefore, today, to see that country having no power or any influence over the Maldives, will undoubtedly be a scene where that they cannot stand at all. Especially when some Maldivians are constantly seeking the said country’s help. It is quite certain that this country will make use of every opportunity to make a ‘puppet’ government in the Maldives.

The Maldivian citizens elected President Yameen for a 5-year term. The citizens will decide who will be their leader. A leadership is not something you can change when some businessmen or some political leaders desires and decides to change it. Especially to do so with the assistance of another country is not something that should be allowed to happen. That is also a very uncivilized move.