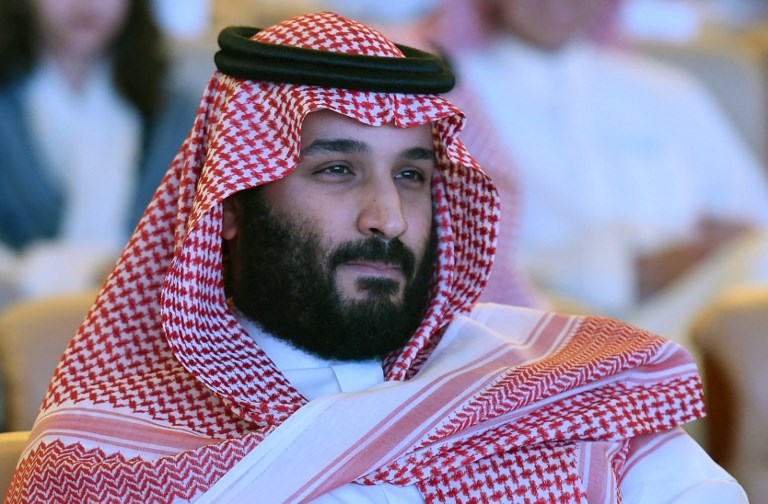 (FILES) This file photo taken on October 24, 2017, shows Saudi Crown Prince Mohammed bin Salman attending the Future Investment Initiative (FII) conference in Riyadh.
Saudi crown prince Mohammed bin Salman’s aggressive power grab represents a huge gamble on the stability of his kingdom and its neighbours, but Donald Trump is not one to worry. The Washington foreign policy establishment may be agog at the young leader’s “anti-corruption” purge of potential foes within the Saudi elite, but the US government barely flinched. No one is quite sure whether MBS’ bold move will leave him as the uncontested leader of a more modern, open Saudi Arabia — or open the door to chaos, rebellion or a regional war.
/ AFP PHOTO / FAYEZ NURELDINE

Main opposition Maldivian Democratic Party (MDP) has called on the authorities to investigate allegations of corruption surrounding the aid provided by Saudi Arabia for development projects.

In a statement released in support of Saudi Arabia’s new movement against extremist ideologies and endeavours for modern development, MDP highlighted the recent accusations that funds donated by the Arab kingdom for major projects in the Maldives had been embezzled and exploited. Calling on authorities to probe the rumours, MDP declared its support for Saudi Arabia’s new efforts to combat corruption.

The party further welcomed Saudi Arabia’s decision to expand its economy, which is heavily dependent on oil exports, into other industries. MDP expressed hopes that Saudi Arabia’s new direction will provide a better living for the monarchy’s citizens.

MDP also harshly condemned the latest ballistic missile launched by Huthi rebels in Yemen against Saudi capital Riyadh, which was successfully intercepted by the Saudi military.

The Kingdom of Saudi Arabia is currently experiencing a sweeping shift of reform and governance under Crown Prince Mohammed bin Salman The latest shock was the mass arrest of 11 princes and four ministers in a graft crackdown, marking the biggest purge of the Saudi elite in modern history. While opinions are divided regarding the development, Saudi Arabia has assured investors that the purge would not affect businesses.