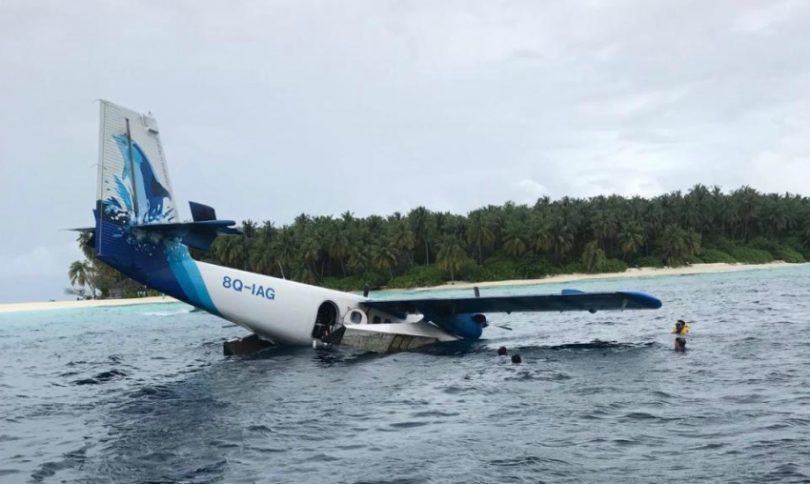 The seaplane of Maldivian after it lost its pontoon during take-off from Dhoores Retreat Resort.

Island Aviation Services (IAS) has refuted allegations made by two British tourists who were onboard a Maldivian seaplane that crash-landed in the sea while taking off from Dhoores Retreat Resort last week.

The incident occurred on November 16 when the seaplane lost a pontoon during take-off. Thomas Markey, 26, and Sebastian Marczyk, 32, of the UK told The Sun newspaper that the pilot and co-pilot had abandoned the 12 passengers and swum for shore after the crash.

Markey claimed that the passengers’ luggage were tied against the fire exit, blocking their escape.

“I turned round and shouted at the crew member at the back to open the door. Two or three minutes later everyone’s in the water without life jackets. I shouted, ‘Get the life jackets out’. But the one I was given was for a baby. The jackets were second-hand and some even expired in 2004. It’s a joke. There was no safety protocol, no instructions,” Markey was cited as saying in The Sun.

He had narrated that the passengers had climbed on top of the seaplane and its wings until a rescue boat arrived from Dhoores 20 minutes later.

According to Markey, the pilot had aborted take-off twice due to bad weather. “After the second aborted take-off, that should’ve been the point we stopped or waited ten minutes for the weather to calm down. But the pilots were being too cocky. The next thing we’d nosedived into the ocean.”

Abdul Haris, the managing director of Maldivian’s operator IAS, rebutted the tourists’ allegations as lies on Wednesday night. However, he stated that IAS can only reveal the details after Civil Aviation Authority completes its investigation into the accident.

Despite withholding details, IAS declared in a statement that the three crew members onboard had followed emergency procedures to bring the situation under control immediately after the crash.

The statement further read that all Maldivian airliners and seaplanes operate in accordance with Civil Aviation regulations which are of international standards.

With 12 passengers and three crew members, there were 15 people onboard the Maldivian seaplane at the time. No one was injured in the accident.