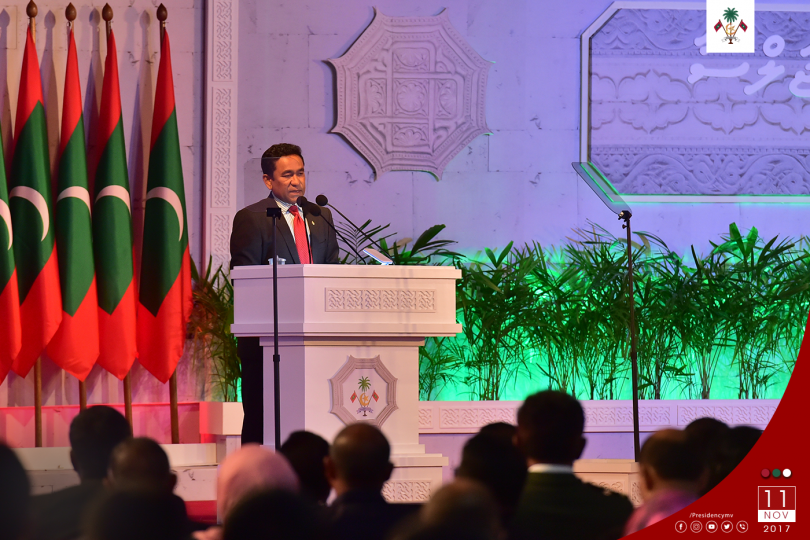 Days after senior Indian and US diplomats met in New Delhi to discuss the Maldives situation, President Abdulla Yameen warned of ‘ideological warfare and malicious economic schemes’ against his country. Between the India-US consultations and Yameen’s Republic Day speech on 11 November, aides openly named Sri Lanka for allegedly assisting the Maldivian Opposition’s coup bid and ticked off the European Union (EU) against ‘taking decisions’ on the internal affairs of their nation.

“Colonialism does not come only through acts of terrorism,” Yameen is reported to have said, after the Chennai based newspaper The Hindu reported that India and the US had discussed’ Islamist radicalisation and the influence of Chinese investments’ in Maldives.  “Instead, today, countries are subjugated by means of ideological warfare and malicious economic schemes,” the Maldives Independent quoted Yameen as telling a gathering, mainly of Maldivian businessmen.

“Maldives would remain a target for “intellectual warfare” as long as it upheld its commitment to Islam and kept the religion as the only one accepted by the State,” Yameen said further. “Acts of violent and religious extremism are also planned intellectually. Such ideological antagonism is what will disrupt the prosperity and the togetherness of society by creating negative ideals, and will transmit over generations to come,” he added.

While Yameen did not name any country, his senior political aides did name Sri Lanka and the EU, in independent contexts. According to the  Maldives Independent, Riyaz Rasheed, a ruling PPM parliamentarian who often doubles up as Yameen’s gun-for-hire in such matters, told Male newsmen that “neighbouring countries are allowing exiled Maldivian politicians to plot attempts to oust President Abdulla Yameen.”

This time round, Riyaz did not refer to Nasheed’s Delhi visit some weeks ago, but he later told the Mihaaru that Sri Lanka’s actions suggest it wants to plunge Maldives into civil war.

But Riaz’s reference to Nasheed’s frequent visits to Colombo from his asylum home in the UK was unmistakable. As the Maldives Independent recalled, on an earlier occasion, Sri Lanka’s Cabinet spokesperson, Minister Rajitha Senaratne, had said that calling for democracy in Maldives could not be termed as a ‘coup plot’.

Before Riaz, Maldives’ Ambassador-designate to Sri Lanka, Mohammed Hussain ‘Mundu’, had declared his intention to urge the host Government to arrange for sending Maldivians in the country plotting the overthrow of the Yameen leadership to face the law, back home. Though he did not use the term ‘extradition’ in his statement, and late reiterations, he meant precisely as much.

Separately now, the Miadhu reported Health Minister Abdullah Nazim Ibrahim’s observation that the European Parliament cannot make decisions, Maldivian domestic affairs. In an obvious reference to the political Opposition in the country, particularly the Nasheed-led MDP, he said, “It is a shameful act to submit cases regarding Maldives to the EU. The Constitution says that Maldives is a sovereign nation. Our affairs will be handled by our Parliament and our courts.”

In a possible and more direct reference to the US and the UK condemning the continued incarceration of Yameen’s then Defence Minister, retired army Colonel Mohamed Nazim, who completed 1,000 days in prison last week, Minister Ibrahim said, “Our jail sentences will be enforced in our jail.” It could also extend to cover the court-ordered, 13-year jail-term, of which President Nasheed has served only a few months.

It is not always that envoys for third nations hold bilateral consultations with a neighbour, which is often left to the home office, or is done through the local diplomatic channels in any of the three or more capitals concerned. In the case of India and a neighbour, this is possibly the first time since the last months of Sri Lanka’s conclusive ‘Eelam War IV’ that a Colombo-based diplomat of a third country has flown to New Delhi for consultations over a nation to which he is the co-accredited envoy, Maldives in this case.

Be it as it may, questions remain about what the ‘international community’ (read: West) can do in la affaire Maldives when the Yameen leadership has the full backing of China, a permanent member of the UNSC and possibly of Russia, too, especially if push came to the shove. This could be so, despite earlier diplomatic tiff over the Yameen Government letting the US Marshals fly off with a Soviet parliamentarian’s son, Roman Valerevich Seleznyov, wanted by American courts many months ago.

As The Hindu report indicated, concerns over Chinese investments now centre mostly on the Male-Hulhumale sea-bridge to the nation’s only airport, the destination of most international tourists, who contribute 20-25 percent of the nation’s economy. According to Minister for Housing and Infrastructure, Dr Mohamed Muizzu, the beams for the ‘Maldives-China Friendship Bridge’ would be brought from China by January 2018. The original schedule was to complete the bridge by mid-2018, obviously with the presidential polls of November that year in mind.

Yameen’s reference to ‘ideological terrorism’ in his Republic Day dinner speech should be contextualised to ‘Islamist radicalism’, another subject reportedly discussed by India and the US in Delhi. In recent years, the Yameen Government has increased coordination with the Indian neighbour, in particular on intelligence-sharing and counter-terrorism methods. In the latter department, it has also had joint exercises and anti-terror training with British, American and counterparts from other countries, where China does not figure.

Independent of what successive Governments in Maldives have been claiming over the past decade and a half, if not more, Islamic orthodoxy at the level of the common man, and Islamic fundamentalism first, and radicalism, later on, have since given place to IS-brand of terrorism. Apart from a dozen or more Maldivians captured en route to Syria for joining the IS over the past couple of years, and also those who had died in the battle there and those captured along Af-Pak borders years back now comes the first credible proof that they were planning terror attacks nearer home.

Incidentally, this is the first time that investigators have pointed to Maldivian suicide-bombers targeting home-turf, that too after the earlier expose some years ago about they being used to target the US and Israeli diplomatic missions in south India.

It, however, remains to be seen, how the emerging domestic scenario in Saudi Arabia would pan out in the coming weeks and months, for Maldives and Yameen. If pushed to the wall, Saudi Arabia is one other country that Yameen has been counting upon other than China to bail his Government out in fiscal, economic and political terms.

Alongside the criticism of the kind, Foreign Minister Dr Mohamed Asim, a career diplomat, however, expressed Maldivian interest in taking part in making important international decisions. Even though Maldives is a small country, it has fulfilled international responsibilities and obligations in the past, he said further, indicating the nation’s current interest for a seat in the UN Security Council (UNSC).

It was thus possibly left to Maldives Ambassador to India, Ahmed Mohamed, to refer to the India-US consultations, though obliquely. According to The Hindu, he described as ‘sensational’ statements born out of ‘western double-standards’, US references ‘disturbing and unfortunate’ anti-democratic actions of the Maldivian Parliament. “We have said other countries must not be prescriptive or interference in our affairs,” he told The Hindu further.

On the political front, former President Maumoon Abdul Gayoom, meanwhile, said suggestions for considering a ‘common, non-political, interim candidate’ for contesting the presidency (as mooted by Nasheed from London) were ‘too early’. After a meeting of the steering committee of the four-party Joint Opposition (JO), of which the MDP is a part, he said that they would, however, continue to fight together for (political and constitutional) reforms.

If for instance, Nasheed and the MDP are possibly looking at an interim President of the JO choice working for removing his current prison term and consequent disqualification, others in the coalition may have their own priorities and pre-conditions.

Gayoom and Jumhooree Party leader, Gasim Ibrahim, might want the constitutional age-bar on their eligibility to contest polls removed. Gasim is also disqualified from contesting polls owing to what his camp says, is also a ‘sham trial’ while Gayoom’s parliamentarian-son, Faaris Maumoon, too is in prison, facing another case that could end up in his possible disqualification.

This apart, Gayoom is without a party just now, as the courts have handed over the PPM, founded by him, to Yameen, and the police too removed the party flag from his office. It remains to be seen if at the appropriate time, the Gayoom camp would want the ‘constitutional reforms’ to include the restoration of the PPM to them, or if he would want to revive the rump DRP, from which he walked out after his one-time deputy side-stepped him in the long run-up to the 2013 presidential polls before joining Nasheed’s MDP.

A third alternative for Gayoom would be to found a third party, in less than 10 years. He should then be able to muster up a verifiable membership of 10,000 to be able to register it with the Election Commission, if only to be eligible for State funding under the 2008 constitutional mandate. This is true of his reviving the DRP, too.