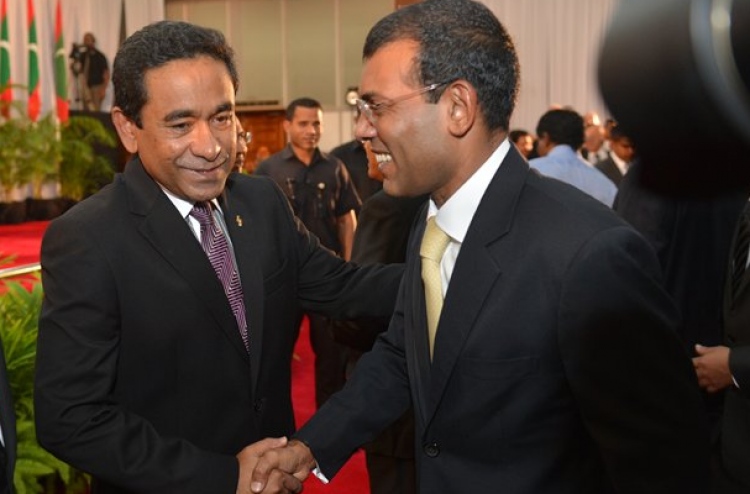 The original Dhivehi article was published on Mihaaru.com website on 16th November 2017.

This is what the opposition portrays about the current administration. And they are doing whatever it takes to convince the public into thinking that what the government does is in fact not real. While they kept on saying that Hulhulé-Malé bridge will not be built, the bridge is almost finished now. And when the government began reclaiming the swamp of Kulhudhuffushi to make airport on the island, the opposition released a statement saying the airport will not be built.

The real target of all these is the 2018’s presidential election. Both sides are now doing whatever kind of ‘persuasion’ they can to get the citizens on their side and win the next year’s election.

What the government is doing is showing their developmental works. The opposition shows the government’s dishonest dealings and corruption. The majority of the People’s Majlis used to passing bills whatever they want and altering the laws as and when they please. 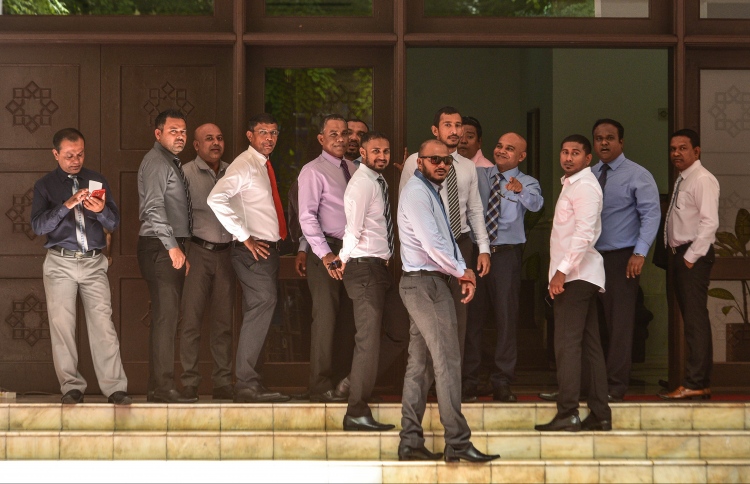 Opposition and Pro members at the Parliament

But the question is do these people under the ‘opposition’ banner pretending to be as pure as a “white washed cloth’ criticising President Abdulla Yameen, have the right to be this, place the entire blame on the current administration?

Looking at the facts, Maldives fell into this position because those in power and the opposition members in the parliament, joined together and conducted the ‘political businesses’. That is when both sides partnered together to play with the constitution.

Therefore with the ‘deal’ made with the government, and since MDP and Jumhooree Party (JP) voted in favour of the amendment to the Constitution on 24 June 2015, they have lost their right to act in the capacity of the opposition to criticise the government.

If the government is currently not doing something right, the real reason is due to the ‘close relation’ between former Tourism Minister Ahmed Adeeb and parliament opposition (MDP and JP) members and the ‘political businesses’, born through it. 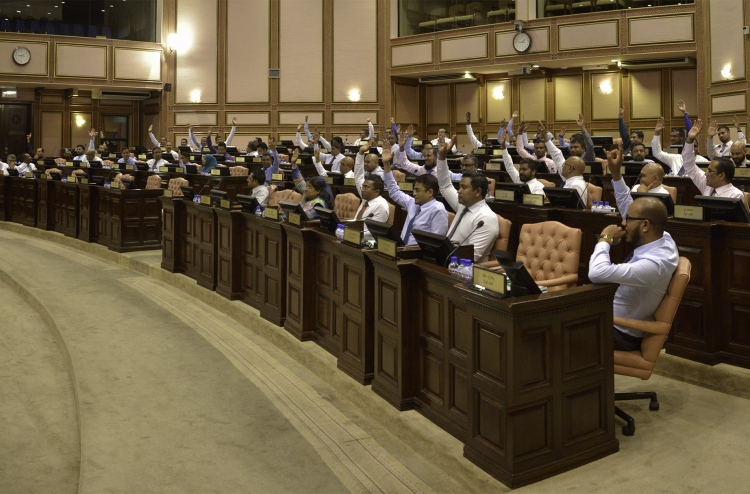 The members only would know the financial benefits gained through those businesses. All those businesses ran through the opposition to free MDP’s spiritual leader Mohamed Nasheed from prison. It was very nicely done by the MDP. And the government also got what they wanted.

However, by freeing Nasheed, what did the country gain? When they accuse the government of abusing citizens rights, what has Nasheed done or is doing to regain back those rights?

‘The key for all these atrocities was given to the government with two incidents: when they made the deal with the government to make Ahmed Adeeb as the Vice President and when foreigners were allowed to own land. It allowed President Yameen to do whatever he pleased since then,’ said a former minister of the current administration.

When the opposition united to change the Constitution, it was MDP and JP who were the opposition. Through this business deal that took place, what MDP did was achieved the right of a single person. JP became involved in it, due to several reasons.

‘MDP made that deal to free Nasheed. There was no other purpose. The deal didn’t include solidifying the democracy and ensuring basic human rights for all citizens, right?,’ said the ex-minister.

‘When they did whatever to Constitution to free Nasheed, by making a deal with Yameen, what was it that the citizens gained, or what the country gained? When Nasheed was released and is living in London, does he know the condition that the Maldivians are living, or where the citizens rights are?

Another former minister of the current administration said MDP and President Yameen began making deals long before they started playing with the constitution. 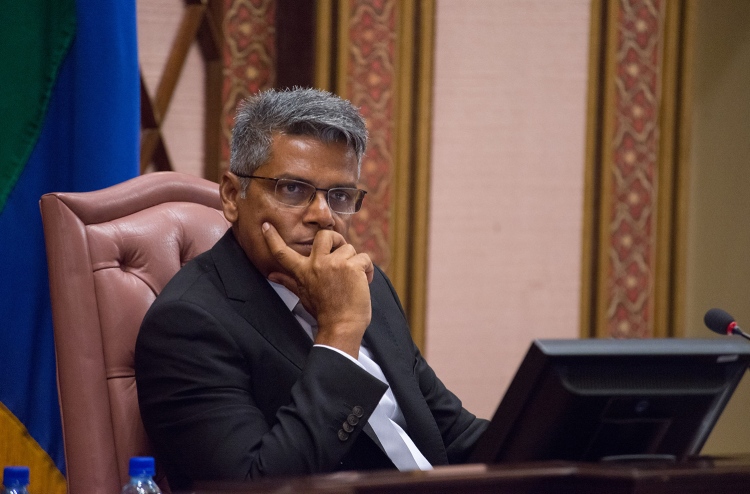 ‘The deals started when they parliament’s speaker and deputy speaker was elected. When President Yameen took power, his first move was to persecute JP Leader Qasim Ibrahim. In the parliament MDP and President Yameen sided. Amusingly, in President Yameen candidacy, JP was the partner. However, after making the deal, vice presidency was given to MDP,’ the ex-minister said.

According to the ex-minister, from that point on MDP and President Yameen built a relationship, did under deals and started the game of tricking people. When the government prepared to play with the constitution and other legislations, Qasim was entrapped in his business. Some of his accounts were frozen and some of his cases were taken into court.

To free Nasheed or for another political reason, if the biggest opposition party and other members didn’t commit those dirty acts in the parliament, would Maldives still be in the place where we are now?

‘If the opposition of then, stood up with mighty force against the dirty deeds of the government, the autocracy and tyranny cannot go out of hand like present day. They wouldn’t dare play with the Constitution and make changes to the legislations,’ the source said.

According to the ex-minister, even when it comes to face the 2018 election, the scene of the Maldives politics would be the repercussions of the deal that they made with the government. The outcome will be seen when the opposition disapproves of the candidate MDP selects.

Maldives politics analysts says under the Maldives United Opposition (MUO), if the MDP National Council nominates one candidate and if the candidate is not Nasheed, then opposition coalition will disconnect. 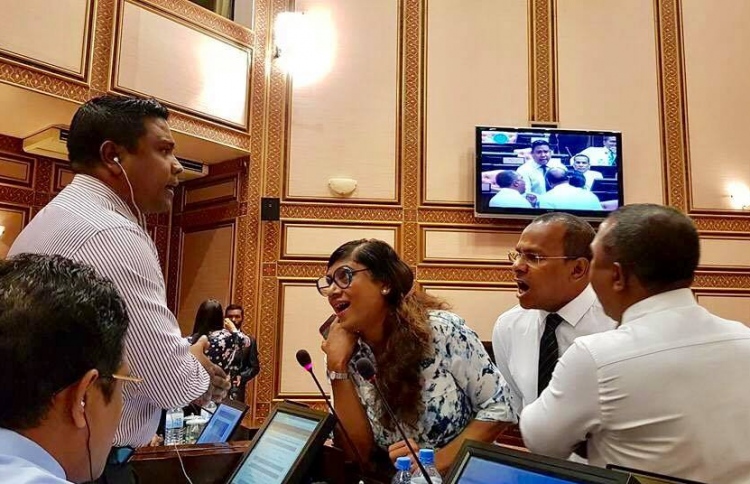 Based on Nasheed’s talks, although he is trapped in a long prison sentence, he doesn’t seem like he is going to give up for another candidate. It could be the big political figures he get as per his calculation.

As per Nasheed’s calculations, the MUO should get behind him. As although he has a long prison sentence and is planning to face the election by himself, the international community might not extend the required support for him.

Instead, if all parties are behind him, his prison sentence is not something accepted in the Maldives political arena and Maldives’ political leaders also want to bring him to power, will be something the international community will be willing to accept more.