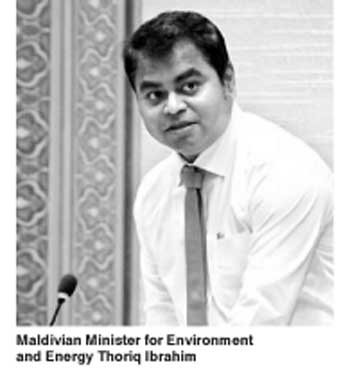 The plight of small island states was forcefully voiced by Maldivian Minister for Environment and Energy Thoriq Ibrahim at the 23rd Conference of Parties to the UN Convention on Climate Change (COP23) being held in Bonn, Germany.

The Maldivian Minister pointed out that in 2017 climate change had ravaged Small Island Developing States (SIDS) and called for the urgent implementation of plans, enhancing of targets, and committing more funds to projects for correcting the effects of climate change.

“A relentless battering ram of hurricanes struck the Caribbean recently. The labels given to them were hyperactive, Category 5, highest total accumulated cyclone energy, all indicating the magnitude of the assault. It has been the costliest cyclone season on record with over 400 fatalities,” Ibrahim said.

“The Prime Minister of one of the Small Island Developing States, Fiji, presides over COP23. Indeed, it apt that a leader of a nation facing similar challenges should be the President of the conference. At the Alliance of Small Island States (AOSIS), of which Fiji is a member, Maldives had sought recognition for states that are on the frontline of climate change,” Ibrahim said.

Ibrahim is the chair of the Alliance of Small Island States (AOSIS).

“We are often exposed to the acute end of global warming, yet have the least capacity to cope with its effects,” Ibrahim pointed out.

Own responsibility and act

“As the Chair of AOSIS, and in my capacity as the Minister of Environment of the Maldives, I call on our developed international partners to own their responsibility. The affluence of the modern world was built on polluting foundations. Rich nations – those who have benefitted from vast historical Green House Gas (GHG) emissions – are therefore indebted to humanity’s future. And they must honor that obligation,” Ibrahim said.

“If they do not, nations like mine (the Maldives) will suffer through no fault of our own,” he added.

“The landmark 2015 Paris Agreement acknowledged that Green House Gas (GHG) reductions should be tied to historical emissions. Now, in Bonn, we must figure out how exactly each nation implements its Nationally Determined Contributions (NDCs), as well mechanisms to monitor the level of reductions. The framework and solutions are known; we just need action,” Ibrahim said.

The Maldivian Minister further said that the need of the hour is the implementation of plans and concepts already evolved.

“The latest UNEP Gap report states it is not too late to avoid the worst impacts of climate change. Yet it makes for uncomfortable reading. It identifies an urgent need for accelerated short-term action and enhanced longer-term national ambition.”

Need to talk of lives

“Quibbling over important issues such as financing should be avoided. We are talking about lives, not bottom lines,” Ibrahim said.

“The Warsaw International Mechanism (WIM) for loss and damage has failed to provide sufficient financing, as set out in its mandate, for nations that face unique challenges arising from climate change like SIDS.Ibrahim pointed out. The WIM has been a severe disappointment to those that need to replace vulnerability with resilience,” he said.

“The unprecedented year of weather – Hurricanes Harvey, Irma, Jose and Maria; wildfires in the US and Europe; mass flooding in South Asia, and Nigeria; and an unyielding drought in East Africa; will, I hope, give the issue renewed urgency, ” he added.

“In place of the WIM, some states have proposed diluted insurance schemes. But this protection would be insufficient. Abrupt catastrophes would be covered but gradual and inevitable problems, like rising sea levels, would not be. And with the effects of climate change becoming sharper, premiums will only increase for those with little means to pay,” Ibrahim pointed out.

“Alongside a properly functioning WIM, instruments must be created to incentivize private financial flows towards nations vulnerable to climate change. Together, nations must form structures that facilitate the good work of non-state actors.”

“Climate change is a problem that belongs to all of us, not just political officials. This must be recognized at COP23,” he urged.

Minister Ibrahim went on to point out that all of this will be in vain unless the G20 nations reduce their emissions.

“Collectively, the G20 nations account for close to three-quarters of global emissions. Yet on average, they are set to miss their targets on current trajectories. If they do not start to act in line with their commitments, it will seriously hamper global efforts to save our planet. The rest of the world simply cannot afford such procrastination,” the Maldivian Minister warned.

Ibrahim urged the enhancement of targets.

“We need more ambition. The world’s current pledges for GHG cuts is just a third of that needed to keep world temperatures below a 2 °C above pre-industrial levels. If we stay at current levels, the opportunity to keep temperatures below the optimal 1.5 °C – as stated in the Paris Agreement – will also rapidly close,” he observed.

“When spelt out like this, it sounds a lot. But we are talking about nothing less than the future of the planet. With every day that passes, these issues take on a deeper urgency. This leaves little room for compromise. But with political resolve, I am confident we will make progress in all these areas at COP23. And when we do, then we will have a joyous occasion for celebration,” Ibrahim said in conclusion.