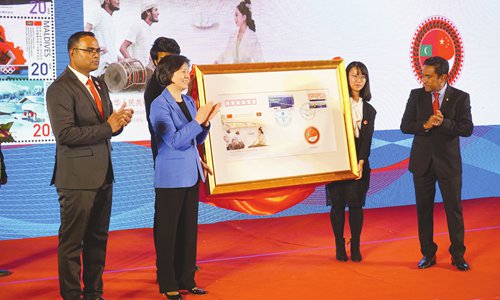 During the visit of the President of the Maldives Abdulla Yameen to China, the grand ceremonial event marking the 45th anniversary of diplomatic relations between China and Maldives took place at the Legendale Hotel Beijing on December 6.

“Today, China is the Maldives’ closest development and commercial partner. The development partnerships between the two countries have reached a new high point.

“Our discussions and agreement were to form the partnerships of future-oriented all-around cooperative ties,” the president said.

“The grand projects launched after the visit, including the construction of China-Maldives Friendship Bridge and the construction of a new runway, have been undertaken. When these two projects are completed in 2018, they will stand as the visible symbols of everlasting friendship between our two countries.”

Chinese postal stamps and a postcard that symbolize the 45th anniversary were revealed at the event. The Vice Chairwoman of the Standing Committee of China’s National People’s Congress Shen Yueyue and the Maldives Ambassador to China Mohamed Faisal also attended the event and gave a welcome speech.