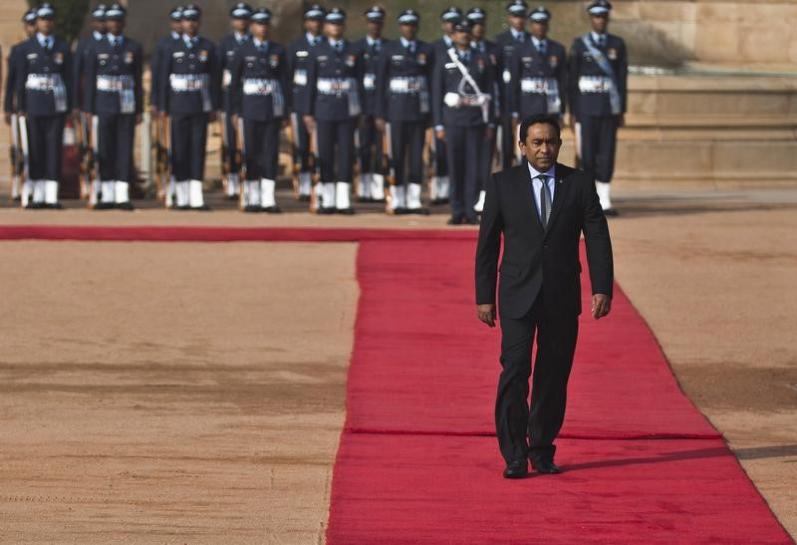 President Abdulla Yameen’s pro-India statements came after reports that there were doubts in New Delhi on Maldives’ decision to sign an FTA with China.

New Delhi: While Maldives President Abdulla Yameen described India as the island country’s “closest friend and ally” and asked the media to refrain from criticising the South Asian giant, he also defended new restrictions on foreign envoys meeting local officials outside the capital. These rules had led to the suspension of three local councillors for allegedly meeting with the Indian ambassador without permission.

On Sunday, the president’s office issued a press release of the remarks made by Yameen during his three-day tour to the northern islands. The focus on India during an island tour followed a series of Indian and Maldivian media reports that pointed out some concerns in New Delhi after Maldives parliament passed a legislation approving a free trade agreement (FTA) with China.

India had raised questions after the signing of the FTA by alluding to Yameen’s self-professed ‘India First’ policy.

Then, three local councillors – all from opposition parties – were suspended for three months on charges of meeting with the Indian ambassador after certain new rules were issued by Maldives government.

An editorial by a pro-government news website, Vaguthu, had accused India of being an “enemy of Maldives”. The opposition criticised the article, which was subsequently withdrawn by the website.

When India had finally broken its silence, the response was mainly on the FTA, with the suspensions and the article dismissed as not worth the attention.

Twice in two weeks, Ministry of External Affairs spokesperson Raveesh Kumar had said that India was studying the implications of the China-Maldives FTA. In the same breath, he had brought up the ‘India First’ policy.

After Maldives government fast-tracked the FTA through parliament despite an opposition boycott, it was signed during Yameen’s visit to China earlier this month.

After the Indian spokesperson had on December 14 raised the ‘India First’ policy and referred to media reports that “alluded to the manner that FTA was passed in Majlis”, Maldivian foreign minister Mohamed Asim had tweeted a few days later that relations with India were “time-tested”.

To repeated questions again during the weekly briefing last Thursday, Kumar reiterated, “You’d also know that they have an India First policy. We also mentioned last time that we expect and hope Maldives will be sensitive to our concerns,” Kumar said last Thursday.

“While appealing for restraint in criticism and asking to not engage in negativity towards India, especially in the media, President Abdulla Yameen Abdul Gayoom reaffirmed that India is the Maldives’ closest friend and ally,” said the communique from the president’s office.

He noted that Indian assistance has been an “invaluable contribution” to Maldives. 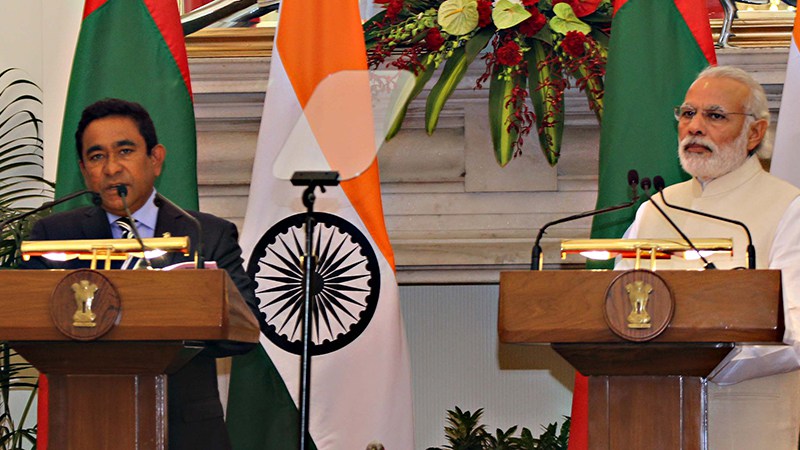 Yameen defended the FTA with China as bringing “several opportunities” for Maldives. However, for the first time, he also announced that his “government was currently working towards a free trade agreement between the Maldives and India”.

A day after praising India, Yameen was at another island, where he specifically touched upon the restrictions put on diplomats meeting with local councillors.

Ther was no official read-out of this speech, but according to local media reports, Yameen said that foreign policy – and therefore, development aid as its instrument – should be discussed with the central government and not with local officials.

“If foreign diplomats are traveling to the islands to provide aid, such aid is provided country-to-country or government-to-government under international treaties and protocols,” the Maldivian president said, according to Mihaaru. He argued that government has to face the brunt of frustration from local populace if promises made by foreign diplomats for aid are not fulfilled.

According to Maldives Independent, Yameen denied accusations that foreign diplomats were being disrespected with the new rule, which requires local officials to take permission from the home ministry before meeting with foreign diplomats and officials of international organisations.

While the three local councillors were suspended after their meeting with the Indian envoy, there was a string of criticism from foreign ambassadors of the UK, US, Australia and European Union accredited to Maldives, who said that the new rule would be retrograde step for democracy.

Most of the local councillors in the Maldives are from the opposition party, since the Maldivian Democratic Party won 46% of the seats in the May 2017 local elections, compared to 26% won by the ruling Progressive Party of Maldives.