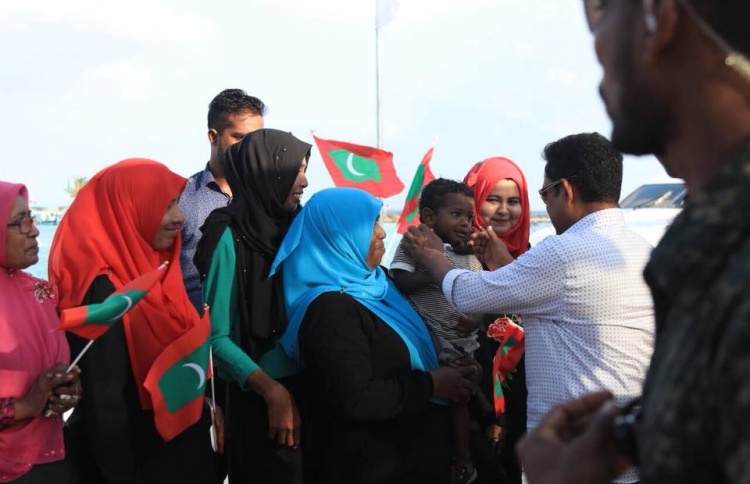 President Abdulla Yameen greets the residents of N. Velidhoo during his visit to inaugurate the island’s harbour. PHOTO/HOUSING MINISTRY

President Abdulla Yameen has cautioned the local media to refrain from insulting the government of neighbouring India.

He made the remark Sunday during the inauguration of Noonu atoll Velidhoo island’s new harbour. Yameen’s rebuke comes in the wake of a prickly article published by the online news website “Vaguthu”, which had accused India of being an ‘enemy of the Maldives’. The article, which harshly criticized India’s leadership and other prominent figures, had sparked backlash from readers. Vaguthu has since taken down the article but the issue is now under investigation by the Maldives Media Council (MMC).

Speaking during the inauguration ceremony in Velidhoo, Yameen declared that Maldivian media should refrain from commentating on personal opinions voiced by private Indian citizens.

“India is our closest ally, and has remained as such over time. Hence, it is absolutely unacceptable for us to slur India, its leaders and political figures,” said Yameen as he declared that the Maldivian government will not commit such an offence.

He went on to highlight that India provides the greatest support and assistance to the Maldives. Yameen further proclaimed that his government is working to establish free trade ties with India as well.

Public stance between the Maldives and India recently appear strained, notably after the latter signed the contentious Free Trade Agreement (FTA) with China, one of India’s biggest rivals. While various figures of India have voiced concerns over China’s growing influence in the Indian Ocean region, a national security expert of India had recently, on a television programme, called on the South Asian giant to topple the Maldivian government with the use of armed forces if necessary.

While this had evoked anger and backlash from Maldivian citizens, President Yameen has reiterated that the FTA with China will not undermine the Maldives’ relations with any of its other allies, especially India.