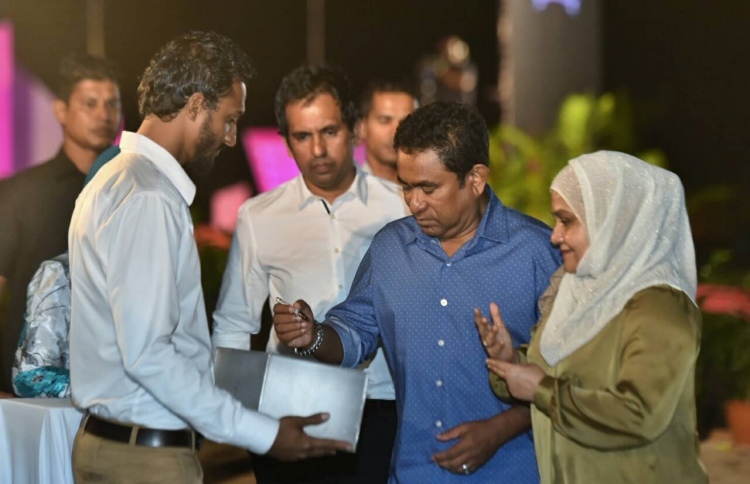 The government’s largest social housing project to date, “Hiyaa” was inaugurated at a special ceremony held at Hulhumale’s second phase of development. The inauguration was marked with a display of fireworks for the large audience in attendance.

Under the Hiyaa project, the government awarded land plots to state companies to develop total 62 towers of 25-storeys each. The towers are to be developed and funded by the companies.

However, president Yameen revealed that half the flats of each tower will be allocated for the public, while the other half is for company staff.

“Though [state] companies are building these towers, it was my condition that half of each tower be given to the public; to people not employed at those companies,” he said.

In his speech, Yameen also announced that the Hiyaa project will be completed in 2019. Acknowledging the project sites where foundations were laid at the ceremony, he added that some of those flats will be let out next year as well.

Noting that each tower will be built according to the capability of the state company in charge of development, Yameen expressed confidence that expenditures will be an appropriate amount for such a project and assured that it will be completed in time.

Yameen further declared that the Hiyaa project is “not the end” but that he envisions development of another five or ten towers in the future.

He described the project as a new hope for the youth and single mothers.

“Why shouldn’t we hope? Why shouldn’t we tell the person who is president that we have this or that hope, to overcome a difficulty? We should be able to. And a president has to see if he can fulfill it. If the president cannot provide a solution, he simply has to say ‘sorry, I’m stepping aside’,” he said.

Highlighting that the government is already carrying out flat development projects in 19 islands, he stated that the proposed state budget for next year includes funds for social housing projects in more islands. He proclaimed that with the completion of these projects and Hiyaa, housing will be successfully provided to 200,000 people, with 7 out of 10 people benefiting from it.

Meanwhile, Housing Development Corporation (HDC) had earlier revealed that 15,000 housing units are planned to be developed in Hulhumale’s second phase of development. The government has reclaimed 240 hectares of land for the second phase.