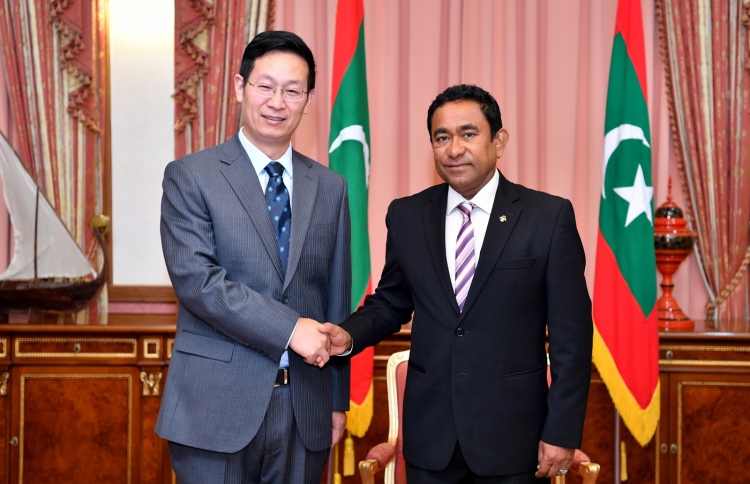 The original Dhivehi article was published on Mihaaru.com website on 6th November 2017.

Even though, Maldives is small, there are important reasons why foreign big nations are interested in the Maldives. The biggest reason is that of the geographical location of the Maldives. It is in an important shipping lane. Therefore, world superpowers have had interests for a long time back.

With this reality then comes the issues that have cropped up from the rivalry between India and China. Many things have emerged from that rivalry.

President Abdulla Yameen administration’s closest ally is the Chinese. Maldives’ the biggest ever project Hulhulé-Malé bridge is being built by the generous assistance of the Chinese. Apart from that, the government has also obtained massive loans from Chinese banks to undertake several other economic development initiatives.

Former President Mohamed Nasheed said that although Maldives has the power to maintain foreign relations independently with all nations, President Yameen has given up that to Saudi Arabia and China.

It is a norm in international relations for one country to influence through ‘Geopolitics’ over another country.

India eyes suspiciously at the Maldives-China relations. For India and US to have a top-level discussion on the Maldives is an indication of their concerns about what is happening now in the Maldives.

In the meeting held at the Ministry of External Affairs of India, between the US Ambassador to the Maldives Atul Keshap and Foreign Secretary of India Dr Subrahmanyam Jaishankar, the US Diplomat discussed the growing Chinese influence and investments in the Maldives.

US and India are two countries that work together in unity. Whilst these two big nations had discussed Maldives situation, even in the Europe hot discussions are ongoing about Maldives.

The European Parliament has also passed a resolution to take action against the Maldives. The reason is that they are unhappy with the direction that Maldives is heading towards. they say that it is against democracy when the government goes arresting the opposition leaders, making endless different allegations against them and charging them with long prison sentences. It was just recently that an EU delegation visited the Maldives and evaluated the situation of the country.

There aren’t many days left for the next presidential election. In connection with the election and with the current ways of the government, they might adopt a policy on sidelining the Maldives. Therefore, the closer the elections get, the chances of Maldives falling to schemes of some big nations are higher.

One example is how the former President of Sri Lanka Mahinda Rajapaksa, who maintained a close relationship with China lost the election. The experts who analysed the situation of Sri Lanka believes that the biggest mistake Rajapaksa did was not embracing an equal foreign relation among the nations.

News Agency Reuters said at that time when Sri Lanka was gearing up for the election, an Indian spymaster was active in Colombo. Reuters also reported saying that to bring Maithripala Sirisena into power, India and allies of India were instrumental.

As per President Yameen, foreign nations cannot intervene in internal affairs of the country. He met with the EU delegation. After that, he directly criticised the UK. Therefore, it could be interpreted as a response to what the EU delegation has expressed concerning issues when it comes to Maldives’ political situation from an international perspective.

The US, India and UK continue to note Maldives’ legal and fundamental rights issues. The other is the belief by other countries the increasing power grip by China over the Maldives.

A Maldivian foreign relations expert, revealed anonymously, that the biggest action to take to thwart out the external intervention is to extend equal relations with all nations.

Senior diplomats of the US and India coming to Maldives and holding discussions is a message among other messages sent. However, the government takes every such expression of concern as an intervention into Maldives sovereignty. The opposition advises to takes it as a useful advice given by the allies of the Maldives to reform the government’s belligerent behaviour towards the citizen and weakening of the independent institutions.

What’s clear is that if Maldives aligns more to one side, the rest would start getting concerned. Even behind the curtain, things will keep moving.