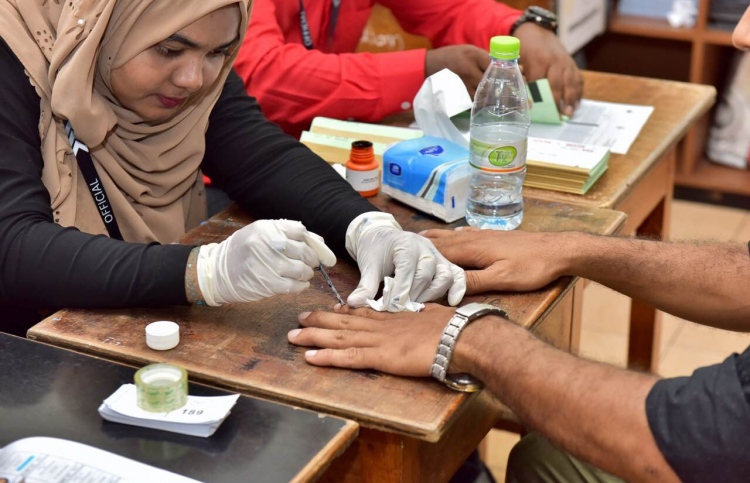 The original Dhivehi article was published on Mihaaru.com website on 29th August 2019.

It’s commonplace in the Maldives to give money and gifts in exchange for votes. And it doesn’t just stop there. There is also making sure that they do in fact vote for them. And to verify they condition the voters to put a special sign on the ballot paper.

There is proof that this is happening in the Maldives from what is observed during the vote counting. However, the politicians have no interest in stopping corruption. Instead, the parliament has been preventing the biggest work that is done to prevent it.

Do politicians want to purposely keep the doors open to vote-buying?

While preparations are underway to hold the presidential election on 23rd of next month, the Elections Commission are saying that a vote will not be nullified even if scribbled on the ballot paper, other than the voting tick mark. The EC says that the law doesn’t allow to invalidate a vote in such a circumstance.

‘According to the present law even if the voter writes or scribbles on the ballot paper, it doesn’t invalidate the vote. Therefore, the same will prevail as it did in the past,’ said Elections Commission member Ahmed Akram.

According to the report published in 2014 by International Foundation for Electoral System (IFES), after the first-ever study on the use of money to buy votes during elections in the Maldives, more than 1 in 3 people (37%) has experienced a monetary exchange for a vote. Those include people that have directly gained goods or service in exchange for a vote and those that have had witnessed such an act. 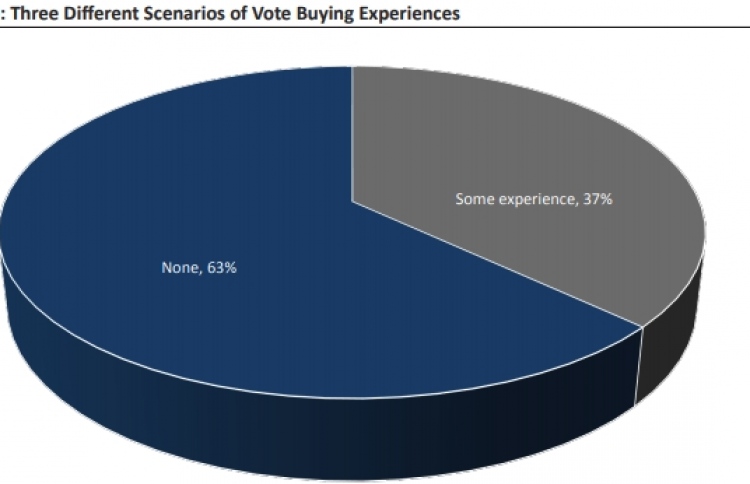 IFES has noted that this is a huge percentage compared to statistics of the rest of the world and said, ‘Although, vote-buying is common in some parts of the world, in the Maldives this has escalated into astonishing high levels.’

According to the 82% of the electorate who had experienced buying of votes, they received in cash. And 53% of them said that a range between MVR 4000 – 20,000 was offered.

According to the survey done during the parliament members elections, it was revealed that, the way to assure that the voter who has taken money or goods or services casted their voted as agreed (27%) by the candidate or a political party by putting a mark on the ballot paper. (The other methods were swearing on the Quran, taking a picture of the ballot paper and holding ID card or passport or driving license card, to prevent them from voting to their rival candidate or political party.) 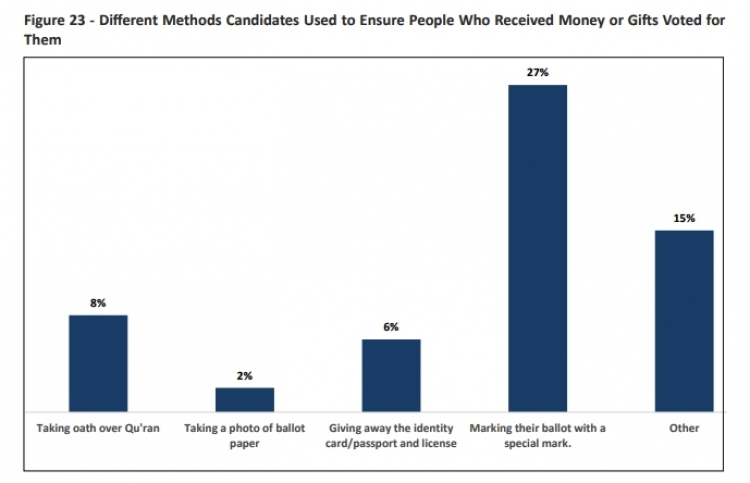 ‘Money can make a difference’

‘According to the IFES report, it is known that 80,000 people experienced vote-buying. In any election held in the Maldives there has not been a difference of 80,000 votes,’ noted Aiman Rasheed, Manager, Communications and Advocacy, Transparency Maldives.

‘For example the difference in 2013 election was 6022. In the Maldives’ elections the highest gap is 6000 to 9000 votes. That difference can be brought by intimidation or blackmailing the electorate. To achieve this result, what is done is vote-buying and disrupting the anonymity of the voters.’

‘This has been witnessed in previous elections. If a special mark is present on the ballot paper the party’s agent would know that the voter had been loyal to them and as agreed to the monetary exchange casted the vote in favour of them,’ said Aiman.

Even now vote-buying is a criminal offence. Since the very beginning it has been a criminal offence and is in the penal code act stating that to manipulate voters by offering an undue benefit in order that the person cast their vote in favour of or against a particular person or political party is an offence. However, while we don’t see that Article being implemented, Aiman noted that the ultimate successful prevention plan to tackle the vote-buying will be to invalidate a voter’s ballot paper if marks and other scribblings are on it, in addition to the voting tick or cross mark.

‘This is how things are done in other parts of the world and in the nearby region as well. If such a change is made to the electoral legislation, everyone would hesitate to scribble on it. No one would want their vote to become invalid,’ he said.

According to Akram ‘Elections Commission does not encourage to write or scribble over the ballot paper.’

‘Commission believes that scribbling over the ballot paper invites for buying-vote. Moreover, it goes on to reveal the voters identification and sometimes their misdeeds. Like writing useless things on it and taking aim at some people in abusive language,’ he said.

‘The ballot paper is to cast vote for their ideal candidate. It is not something for them to misuse and allow corruptive methods.’

To prevent this issue, the EC has submitted twice to revise the Elections Commission Act. However, in 2016 and even this year there was no support from the parliament for it. Twice, the ruling party PPM has initiated to revise the law and but failed.

When PPM member and MP for Feydhoo Constituency Ibrahim Didi on behalf of the government submitted a revision for the bill in 2016, the rejection vote had 67 voting count of which 43 ruling party supporters had voted against it. 24 voted in favour of the revision by MDP and JP members.

Akram said the first time the revision was rejected by all parties combined against the submission. Back then there were talks that the opposition MDP was also in fact against the revision of the bill. It was believed that although the opposition voted in favour of the bill the result would be the same and so they voted just for the sake of it. No matter how things took place, if PPM wanted, along with the government’s majority they could have passed that bill’s revision.

‘First submission was in 2016, back then all parties did attend the parliament. However, no party were able to pass the bill. All parties colluded and dismissed the bill. And this time when the bill was submitted, no party got united,’ Akram said while referring to the boycott movement the opposition has been attempting for all the upcoming parliament meetings. 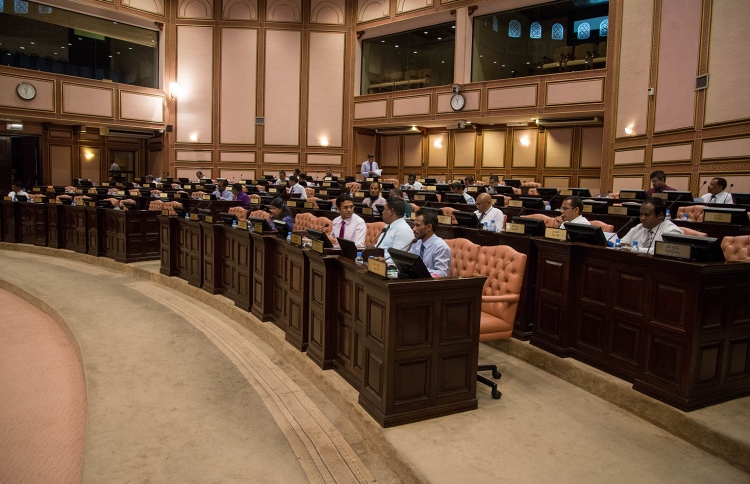 Even when the bill was submitted by Ali Mohamed MP for Holhudhoo Constituency in last June, had the clause ‘if except for the candidate name any other thing is written will be considered invalid.’ However, coincidentally, all 34 government supporting members had passed the bill without the clause.

The most unusual thing regarding the issue of making scribbled ballot papers vote invalidating is where members actions and words don’t match. Strangely, the first time the bill was dismissed, after the government supporting members argued in favour of revising the bill.

‘This is, in fact, a total deception. After saying it is crucial, then goes on and pressed the red button,’ said Aiman.

He said that the parliament failing in on such a big task gives room to believe that there is a motive to manipulate votes by bribing.

‘Meaning it is those who want to buy votes who shoves the bill’s revision out every time,’ he said.

He said that political parties do admit that scribbling on the ballot paper leads to vote-buying. Still, they just don’t try to change it.

‘In the meetings held between us and political parties, we do bring up the issue of scribbling leading to vote-buying. However, none of the political parties wants to take an action against it,’ he noted.

This time instead of the revision of the bill, in the bill it was stated a vote will become invalid if the ballot paper does not clearly disclose the candidate whom they are voting for. It means that in every ballot paper where there is a tick next to the candidate whom they are voting for will be considered a valid vote and putting another mark on the ballot paper and ensuring that a vote is a manipulated will not be considered as an issue.