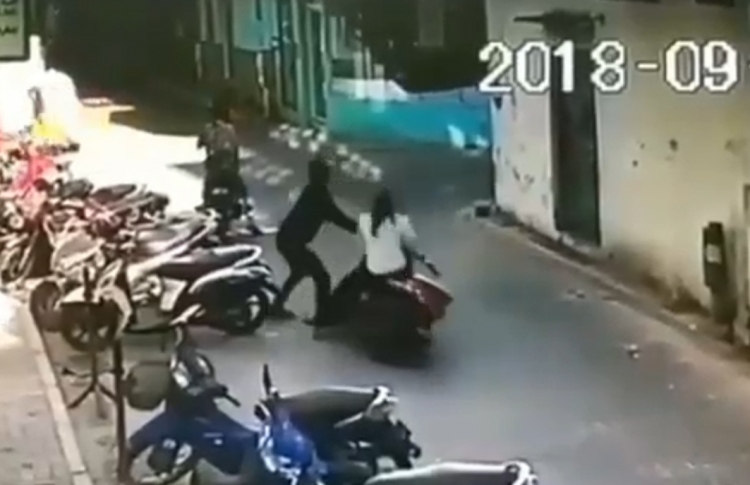 The original Dhivehi article was published on Mihaaru.com website on 6th September 2018

These are questions people are asking at such a time due to incidences where people had been attacked in the public but no one had come to their aid. After the recent surfacing of numerous similar videos, the increasing concern is whether Maldivians have also become mere spectators who just take photos and videos of such ordeals.

Amidst a time when last Friday there was a street murder, bag snatch incident from a woman on Saturday, a video of a wallet being taken from a man’s back pocket and sexual assault of a girl in a boat but nobody on the boat doing anything about it, had been revealed, the concern of the many is witnesses ignoring the victims being attacked.

‘What has happened to us? We are a 100% Muslim nation. While we claim of being civilised and having hospitable people, reality is entirely different,’ Aminath Nahida raised in the public Viber chat group #LetsTalk.

While expressing sadness over the matter one replied,’ It breaks my heart to see the the level of ignorance that has reached in our beloved country.’

‘We had the guarantee before that unlike in India, if someone calls for help on the road, people won’t just stand there watching. However, now our behaviour is worse. Due to that it poses a great stress and nervousness. Knowing that we can’t expect the peace and harmony in our community,’ said Fathima Gasim.

When the murder attack and mugging incident videos surfaced over the last weekend, it was clear that no one tried to help the victims.

Although many believe that ensuring security in the community is a task of the forces, in such incidents there is an important role every bystander or passer-by must play.

At dusk fall near Maldives Monetary Authority, no one was seen to have come to help Ibrahim Ageel (Ibbe), 18, when he was slumped over the Chandhanee Magu soaked in blood. And when a bag was snatched away from a woman and when she called out for help, a passing by vehicle just ignored and left the scene. Behind the cycle of the woman which was lying on the street there seem to be another cycle behind her. While ignoring when she was being mugged, when the muggers ran off with the bag, the cycle also seen to have left.

Even in the past things have happened in similar manner.

‘Even when Anas was stabbed and left to die, witnesses kept taking photos and videos of the incident without taking him to the hospital while he passed away. People have become very callous,’ commented a Mihaaru news reader regarding the stabbing and death of Mohamed Anas which took place in a shop in Malé city.

‘How to help? There’s no justice.’

Perhaps due to fear no one dares to help out. And more believe that this happens as the government had failed to take the necessary action against such criminals and bring justice.

‘Everyone would look out for their own safety right? Here if an attacker flees after murdering someone no action is taken and there is no justice done. So in a place like this, criticizing those who tries to save themselves only do so because they don’t know the real situation of this place,’ responded a Mihaaru news commentator.

‘How can we help someone? They would knife us. Should we lose our lives for a handbag? And even if they did a crime follows no punishment.

‘When they are roaming around with knives, rarely would anyone go after a mugger to get back a victim’s stolen handbag. So talk sensibly,’ another commentator responded.

‘It is certain that even if someone dies the perpetrators won’t be arrested and there won’t be any justice for the victim. There is a reason why the police and the MNDF servicemen are there paid a high salary that the taxpayer pays with their hard earned money.’

However, some pointed out that even if someone hesitates to help someone during an attack, they can do so after the attack. However, no one was seen to have approached the woman after she became the prey of 2 men covered in black masks. And no one was seen rushing to take Ibbe to the hospital from the video.

‘We have all become mere spectators. We have lost the humanity amongst us. Don’t know where it went,’ said Fathimath Nizam.