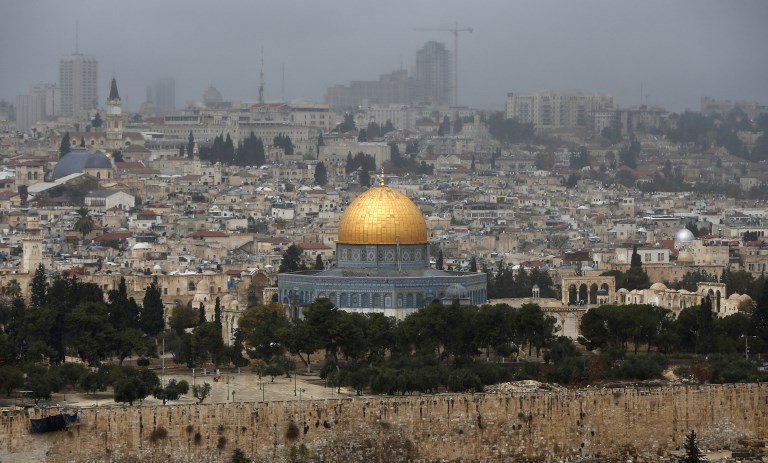 A picture taken from the Mount of Olives shows the Old City of Jerusalem with the Dome of the Rock mosque in the centre, on December 6, 2017.
President Donald Trump is set to recognise Jerusalem as Israel’s capital, upending decades of careful US policy and ignoring dire warnings from Arab and Western allies alike of a historic misstep that could trigger a surge of violence in the Middle East. / AFP PHOTO / AHMAD GHARABLI

The government of the Maldives announced its stand against US president Donald Trump’s decision to recognize Jerusalem as the capital of Israel, declaring it a move that would hinder peace efforts in the Middle East.

Trump made the official announcement Wednesday, fulfilling one of his core campaign pledges and ending seven decades of US ambiguity on the disputed status of Jerusalem, which is claimed by both Palestinians and Israelis. His decision sparked harsh criticism from around the world, with fresh fears raised over more violence in the Palestinian-Israeli conflict.

The foreign ministry of the Maldives released a statement regarding Trump’s decision late Wednesday. It declared that the US’ official recognition of Jerusalem as the Israeli capital, as well as Trump’s order to move the US Embassy in Israel from Tel Aviv to the holy city, are against international laws.

The government stated that this move would have negative repercussions on peace efforts in the Middle East as well as around the globe. The Maldives noted that the opportunity to establish two states for Palestine and Israel is pivotal to end the bloodshed and bring about lasting peace in the region.

“The Maldives recognizes the eastern sector of Jerusalem as an occupied territory of Palestine,” the government proclaimed as it called on the US to respect UN Security Council resolutions and international peace efforts.

The statement went on to assert that the solution to the Palestinian-Israeli conflict is to establish a sovereign state for Palestine with Eastern Jerusalem as its capital. Palestine and Israel must be established as separate, neighbouring two states, with a clear boundary as determined in 1967, said the government.

The Maldives further vowed its cooperation with international efforts to ensure the independence and sovereignty of Palestine.

In a tweet late Wednesday, Maumoon called the recognition of Jerusalem as the Israeli capital “an act of support to injustice and aggression.”

“It will further destabilise the region and obstruct the peace process,” he warned.

Nasheed voiced similar views in a tweet, saying, “Pursuing a policy that will cause further discord in a space such as Jerusalem will only serve to antagonise extremist views on all sides of the conflict.”

Israel seized the largely Arab eastern sector of Jerusalem during the 1967 Six-Day War and later annexed it, claiming both sides of the city as its capital. The Palestinians want the eastern sector as the capital of their future state.